Home Culture Racism And The Curse Of Whiteness 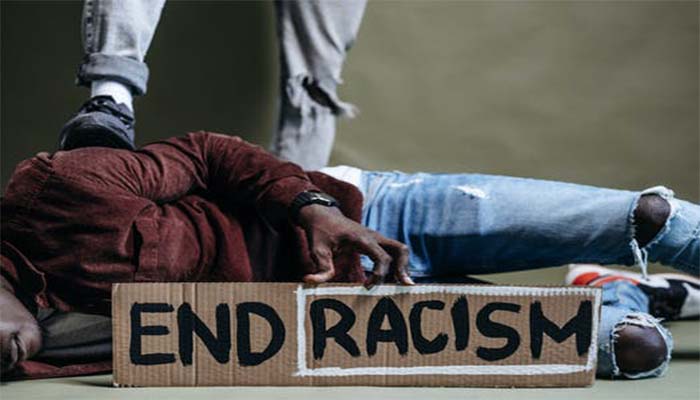 I woke up angry this morning, my joints aching, my head throbbing. That’s not abnormal, I confess. Anger is my forever friend. I know it well. Today, though, my anger was something different. It was sadness dressed up as anger. All my emotions dress up as anger. It took me a long time to realize this. I used to think I was angry all the time. I wasn’t. Sometimes I was depressed or anxious or sad. In a former life, I might have rolled out of bed with my anger and sought to expel it as fast as possible, on my wife and kids, perhaps.

Today, though, I know better. I know I must sit with my anger for a moment, allow it to marinate in my heart and mind, bathe it in my circumstances, in the past and future. Then the actual emotion shows itself. It showed itself quickly this morning. Why am I sad? I’m sad because people are racist. I’m sad because, last night, I saw this demon face-to-face. What I saw shook and disoriented me. It was scary and heartbreaking. I would give a lot of money for Will Smith to pop me with one of those Noisy Crickets and erase my memory, purge the snapshots from my consciousness. Is ignorance really bliss? Sometimes I think so.

I’ve watched the videos. The ones where white people expel their hatred onto black people for no reason. They’re disturbing, unnerving. There’s an emotional disconnect with those videos, though. They illicit a response. But the response is short-lived. I’m upset, then I’m over it. They lull your conscious mind to sleep by leading you to believe the problem is “over there.” It’s not here, not in my backyard. Racism exists in evil lands like New York City and Philadelphia, not in Birmingham. As long as it’s over there, it’s not my problem. This is a lie, of course, but if you never see it, with your own eyes in your own context, is it reality?

We grabbed two large pizzas at Dominos and went to our friends’ house, Dave and Lucy, to eat. When we arrived, we noticed several cars parked in the road, at least three, maybe four or five. It’s a block party, I thought. But why? Dave and Lucy should’ve mentioned this before inviting us over. I need a heads up if I’m expected to engage with strangers for any length of time.

When I got out of the car, I different energy filled the air, though. It wasn’t the energy of friendship. Something was off. A lady stood at the front door. I didn’t recognize her. At least two more ladies stood in the road, their cars parked directly behind the lady’s at the door. I heard one screaming, “She tried to steal something out of my mailbox. Then she assaulted me. She’s going to jail!”

What is happening, I thought? This isn’t a block party. What have we rolled up on? I grabbed our dinner from the backseat and walked across Dave and Lucy’s yard. The closer I got to the front door, the clearer the picture became. The lady at the door was upset. She was crying. “I didn’t do anything,” she said. “I was just looking at the numbers on the mailbox. That’s it.” The lady worked for one of those meal delivery companies. Lucy had her arm own around this lady. “It’s okay,” she said. “It’s a misunderstanding.” The lady at the front door was black. The two ladies on the street were white.

I was about to walk inside when I heard sirens. Then I saw the line of blue lights coming around the corner. They filled the night sky. A fire truck lagged behind. Why a fire truck? Maybe it was protocol, but it looked like a turtle fell in line with a row of ducklings, hoping the other ducks wouldn’t notice.

The pieces of this horrific puzzle continued coming together. The black lady couldn’t find our friends’ home. She wasn’t from the area and couldn’t see the numbers on the mailbox, so she pulled next to one, thinking it was Dave and Lucy’s. It wasn’t. She pulled up to the wrong house. When she did, the owner happened to be outside, sitting on her porch, and immediately ran to the mailbox. Without asking any questions, she accused the black lady of stealing her mail. She was aggressive and confrontational. I noticed that when I arrived. You could see it in her demeanor, as she yelled at the air, demanding punishment, hurling accusatory words across the road at a woman she didn’t know. Then I realized why the two white ladies parked their cars where they did. They were blocking the black lady in, preventing her from leaving.

The police asked my friends some questions. Did you see anything? Do you know the lady at the street? Things like that. They didn’t see anything. The altercation occurred up the road. The police apologized to my friends, and said we could go inside, that they would handle the situation. So that’s what we did. There was nothing else we could do.

We sat down at the kitchen table. No one said a word. The magnitude of the moment descended on us, paralyzed our thoughts, muted our tongues. We tried to make sense of what we saw. Finally, I spoke up. “Do you think that lady would have called the cops if the delivery person was white?” Sometimes it’s better to tolerate awkward silence than allow your anxiety to break it. What comes out is almost never helpful. My friend Dave looked at me, and said, “I think we all know the answer to that.” We did. I grabbed a piece of pizza. Pizza never tasted so disgusting in my life.

The rest of the night, time was in a vacuum. It didn’t seem real. We talked about different things, but the racism that filled the air outside dominated our consciousness. I wanted to stand in for the black woman, advocate for her. I hoped, prayed she wouldn’t go to jail, that the police wouldn’t mistake the white woman’s loud tone for truth. We do that, don’t we? In a world with so much noise, the loudest voice often sounds like the right one.

We are so easily manipulated.

Racism Is In Your Backyard

“It’s time to go, kids,” I said. I opened the front door. Everyone was gone. It was like nothing happened, like this dreadful incident never occurred. How is it possible that the world can so soon return to normal? I still felt the hateful energy. Its remnants remained, even though the individuals who created it left two hours ago.

“Did that lady get arrested?” I’m not sure which of my kids asked this, but my first thought was which lady are talking about. In my mind, I hoped the screaming lady got arrested, but I knew my kids meant the black lady. They heard the white lady screaming and carrying on. The black lady must have done something awful. People don’t scream and yell like that for no reason. These little ones are so naive, their heart and mind so innocent, and I wanted to cry thinking about all the grief that awaits them as they get older. Things aren’t always as seem.

Me and Tiffani tried to answer the question. Tiffani did most of the talking. She’s so good with things like this. She knows how to navigate hard conversations in age-appropriate ways. She told our kids that some people choose hatred over love, and that some people don’t like others because their skin is a different color. She told them that our family celebrates all skin colors, that we don’t tolerate the sort of behavior we witnessed tonight. She went on for some time. I don’t remember all she said, but it was beautiful and redemptive. It was Truth.

Racism is evil, man. It’s demonic. It’s alive and active, and it’s in your backyard, right now. Doesn’t matter where you live. You can’t pretend it doesn’t exist. And you can’t pretend you don’t have a role to play, especially if you call yourself a Christian. Yes, this demon is large and powerful. It’s tentacles stretch through generations. A force like that can paralyze you, make you believe you’re powerless. That’s part of its game. You’re not powerless, though. You can do something. Educate yourself. Allow different voices to permeate your mind. Teach your children. Tell them the truth about our country’s racist history and about privilege. Sins that extend through generations often take generations to heal. Maybe it will take a new generation coming of age with a healthier worldview to lay this demon to rest. If so, then the healing starts with us.

The Curse of Whiteness

As I meditate on Jesus and the gospel, I can’t help but wonder if whiteness is a curse. We have created a god that looks and acts like us. We sing and worship this god every week, and we never have to look honestly at ourselves or our god. Meanwhile God doesn’t appear to side with the ones in power. God seems to warn comfortable, success-driven peoples over and over, and over and over they don’t listen. We’re doing just fine, thank you. Those in power know very little about oppression and neglect and therefore very little about letting go. You can’t know God if you don’t know how to let go.

Jesus let go of everything, after all, to walk this dusty ball, to give us Life. Whiteness loves Jesus, which is odd, because Jesus stood against everything whiteness stands for. Then I realize that whiteness doesn’t really love Jesus. Whiteness loves white Jesus. We leave the hard parts out, the parts about letting go, for example, and loving our neighbor, which involves learning their story. We know Jesus only through the lens of power, and that’s no way to know Jesus. Jesus rejected power, in all its forms.

Whiteness fights to protect the status quo. It says that if a black lady pulls up to my mailbox, she must be stealing something and I have the right to hold her hostage in other person’s driveway until justice is served. (Justice was served, by the way. No charges were filed.) Whiteness says I can shoot a young black man for running in my neighborhood. Whiteness says I can storm the steps of the capitol when my worldview appears threatened.

Whiteness doesn’t look after the well-being of the world. Whiteness only looks after itself. Whiteness is the opposite of love. We’re blinded by our privilege. We can’t see that God sides with powerlessness, not power, and until we learn this we can only know little-g god, the one we fashion into an idol with our values. But we can’t know the Ancient One, the Creator of the Cosmos.

I want to know God. I have no greater desire than this. But I also feel a strong pull to protect my whiteness. Letting go is uncomfortable. Listening to different worldviews is hard work. But I must try. I must. I want healing to descend on our land.

Racism will one day cease to exist. Will we wake up and engage the hard work necessary to see its end? I pray we will. I pray I will.

Why We Need Winter To Become Whole