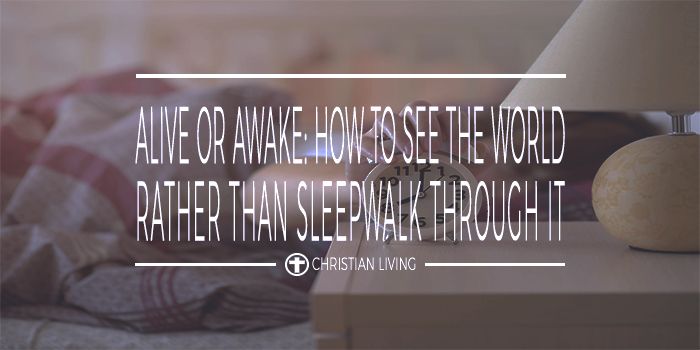 I’ve never seen a sleepwalker. My wife, Tiffani, says the experience is quite terrifying. Her sister is a sleepwalker. When Tiffani describes her sister’s sleepwalking journeys, I liken her sister to a puppet who’s fastened to the strings of the subconscious, unaware she’s able to make decisions independent of them.

In other words, she’s alive but not awake.

This, ironically, sounds similar to what we see every day, men and women fastened to the strings of life, unaware they’re in control of their decisions and, ultimately, their destiny.

It’s sleepwalking of a different kind. Let’s be honest, it’s possible to be alive but not awake, to breathe with our lungs but never see with our eyes.

You might perform daily tasks like eating or drinking. You might even engage in complex tasks, like navigating rushing hour traffic. But, ultimately, you’re at the world’s mercy, enslaved to its erratic, uncontrollable turnings.

If the world falls apart so does your life. If your friends say do it, you do it. Your dreams and steps, the journey that is your life, is really nothing more than a compilation of outside influences.

Many people pat themselves on the back for this type of life. After all, it can lead to coveted degrees and prestigious titles.

Being alive is no accomplishment. It’s very easy, in fact, and requires no skill or effort. Every human being on earth is alive, all seven billion of them. They breathe, eat, sleep and walk. They climb ladders or scale mountains. They earn doctorates and raise families. But they’re doing so with closed eyes.

A wakeful life, however, might be the priciest thing on earth because it’s extremely rare. And much like an expensive material such as gold or diamond, you know it has value when you see it. Undoubtedly you’ve seen one, a man or woman living awake. Martin Luther King, Jr. is an example. Nelson Mandela is another. I also think about people like Abraham Lincoln and Mother Teresa. And the greatest example, Jesus.

What does this life look like? Here are 7 ways to wake up from your slumber and live awake rather than just alive.

1.) Serve the world rather than allow it to serve you.

For even the Son of Man did not come to be served, but to serve, and to give his life as a ransom for many.” Mark 10:45

This verse is a summation of Jesus’s ministry. But it’s more, much more. It’s God’s mantra, maybe the one sentence that captures His character more than any other.

That’s big stuff, right? Of course it is. If this is God’s mantra, his framework for every decision and action, it should yours as well. God, the “giver” of life, shows you the pathway to being awake.

Those who are sleepwalking through life are takers, not givers. They’re gluttons, expecting the world to serve them, using people as a means to accomplish their selfish desires.

If you want to wake up from your slumber, give yourself to others. Do so generously. Find a pursuit greater than yourself. Feed the homeless. Share Jesus with your neighbor. Become a missionary or financially support one. Give what you have – time, money, gifts, or whatever – and you’ll find life.

2.) Embrace reality and stop creating ways to escape it.

If you wake up, you will discover the same world as those who are asleep. Death, disease, pain, suffering, and loss will still be around. But rather than creating a means to avoid them, you will realize the transformative power of embracing them. You will overcome alcohol addiction rather than accept it, build intimacy with your spouse rather than live in the same space with him or her.

Rami Shapiro says, “The promise of wakefulness isn’t a new world, but a new you.”

When you wake up, your perspective changes, not your world.

Rather than drink alcohol, take prescription meds, or visit the local mall to numb pain or loss, you step into life, with its difficulties and struggles.

When good things become numbing agents for bad experiences you fall into the category of sleepwalkers.

Escapism is dangerous because it says you can find a full life by removing the bad parts, and it often uses seemingly good things, like shopping or medicine, as numbing agents. We fall into addictive behaviors and away from a closer relationship with God.  We also miss an opportunity to wake up from our sleep.

3.) Pursue eternal rather than temporary things.

According to the apostle Paul, we should fix our eyes on things unseen because what we can see is temporary while the things we can’t see are eternal (2 Cor. 4:18).

What if Christians pursued Jesus like they pursued a college degree, a job title, or a social media following?

When you’re focused on temporary things, you can’t see the greater things, the ones that wake you from your slumber. Love will always be something others find (like it was ever hidden?), peace will be more for hippies than followers of Jesus.

4.) Look for the miracles of God in everyday life.

The miracle is not to walk on water but on the earth.Thich Nhat Hanh

There was a time in my spiritual journey when I longed to see miracles like the apostles. I mean, can you imagine. One moment, you see a few fish. The next, a few thousand. Place yourself there when Jesus raises Lazarus from the dead. The dude was wrapped like a mummy. The smell of death was must have punched those closest to his tomb like a heavyweight boxer.

Man, what those miracles would mean to my faith.

Then, one night, I had a dream. I dream often, but this one was different (Never underestimate the power of dreams. In Scripture, God often communicates important messages through them). So, in this dream, I ask God to see a miracle. God says, “Okay.” Now, I’m stoked. But rather than someone walking on water or being raised from the dead, God directs me to the mirror. He then asks, “Are you breathing?” Puzzled, and slightly frustrated, I say, “Yes.” God then says, “There you go.” And he walks off, like a boss (because technically he is).

What the poo, God? That’s not a miracle. It’s just me…breathing.

One of the greatest spiritual practices, especially in our age, is finding the miracles among the ordinary. This requires paying attention, something that costs too much for the busy and hurried.

The trade-off, however, is much more costly. The busy rarely experience God, equating miracles to words like grandiose and extravagant. The little things like breathing, speaking, and eating are overlooked because they’re not spectacular enough for busy eyes.

When Christians say they don’t see God working, what they really mean is they have fallen asleep. God is always working, performing thousands of miracles in your life every day. It’s your job (and mine) to live with expectancy, to look for the miraculous in the ordinary. Start with the mirror.

Are you breathing? There’s miracle number one.

It is largely great love and great suffering that create spiritual listening and larger seeing. Mere belief systems and church services do not of themselves assure such transformation.Richard Rohr

Working with teenagers and college students for five years, I’ve watched more than a few young people walk away from God. It’s gut-wrenching. You never get used to it. Just as difficult to watch are the parents, questioning themselves and, sometimes, God. When these parents approach me, they generally want to know what’s next, how they can bring their prodigal home.

I want to hand them a magical antidote, a surefire way to shift their child back to God.

But I know the reality.

Generally speaking, only great love or great suffering will bring a prodigal home.

I’m not sure why this is so, but it is. We, humans, tend to operate in cruise control until we meet love or loss. It’s when we encounter these that we’re reminded what’s important.

We ride through life in cruise control until we meet great suffering or loss.

Why do people who meet their future spouse finally decide to get their lives in order? Love.

What forces meandering or even addicted couples to change when they hold their first child? Love.

How come so many testimonies at church start with someone on the streets, in a rehab facility, or burying a family member? Suffering.

Maybe this explains why the Bible speaks of suffering as a joyful blessing and love as the greatest of all virtues. Void of them, I’m not sure it’s possible to be awake. Without love and loss, eyes wouldn’t be necessary because seeing would be impossible.

Great suffering hurts. Great love is scary. But it’s in these moments, God re-aligns your life. Don’t run from them.

Francis Chan’s book Crazy Love spoke to me like few books have. One sentence, in particular, sits on my Mount Rushmore of quotes.

“Our greatest fear should not be of failure but of succeeding at things in life that don’t really matter.”

I remember reading those words and immediately questioning my pursuits. I knew I was succeeding at things that didn’t matter. I wanted the American Dream. I wanted others to look at my house and car, my lifestyle, and think “successful.”

Although I was a “Christian,” I wasn’t that close to God. I knew the stories about Moses, Noah, and Jonah. God called people to leave their stuff. What if He called me to Africa? I couldn’t be “successful” there. What if He asked me to sell my stuff and move to the inner city? That’s not the American Dream.

I’m afraid this is attitude of many Christians in America. We attend church. We might even volunteer in children’s ministry. But we don’t really want God. We want success, stability, or comfort. To outsiders, attending church and volunteering says “I have it together.”

The only way to wake up (and not allow your last breath to be your first glimpse of the life’s fullness) is to step out of your comfort zone.

Think about your life. Are you succeeding at things that don’t matter?

You shouldn’t fear failing but succeeding in things that don’t matter. -Francis Chan

7.) Focus on your motives and intentions rather than actions.

Integrity is a dying virtue. People who value intentions and motives over actions and external results are rare. They are in my little world, at least.

Maybe this is why our country is struggling, maybe even (dare I say it) declining. We’re void of men and women with high integrity, the definitive mark of a good leader.

I’m not sure why. Maybe it’s because integrity takes time, the very thing we don’t have.

Maybe it’s because integrity brings us face-to-face with our intentions, forcing us to do some hard, painful work. We don’t like pain. So, rather than perform surgery to remove cancerous motives, we put on makeup or chic clothing to mask what’s underneath.

Until we purify our intentions and become brutally honest about our actual motives, we’ll never wake up to life’s fullness and beauty.

Integrity is about transforming your intentions and motives, not actions.

Those you know who are not just alive, but awake, do the work, the hard work of purifying the heart. They do this work every day, embracing Christ-centered, Spirit-led transformation as an inside-out job.

There are many more things that characterize someone who lives awake. This is where I would love to hear from you.

What’s the difference between being alive and being awake? Leave a comment below.