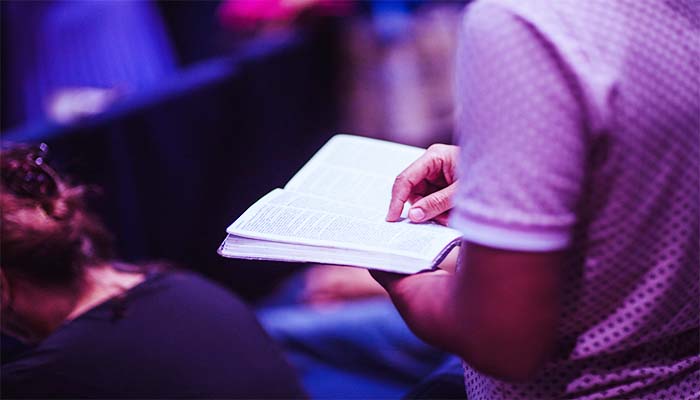 Last year, I did one of those read-through-the-Bible-in-a-year plans. I followed it too. Every day, I read my chapters, usually on my commute to work. It was a good kick start to my day.

I did this for about six months. Then, like most of you, I got sick or went on vacation, fell behind a week or two, and that was it. I couldn’t catch up, so I quit. You know the feeling. That’s the problem with Bible reading plans. They don’t account for life’s inevitable gut punches. Those unread chapters pile up and develop a voice, and that voice heckles you like a drunk fan. You feel like an awful Christian because you can’t follow through on a simple reading plan. Rather than endure the verbal assaults, you throw in the towel.

I mean, seriously, I don’t know anyone who has finished a year-long reading plan. People who finish those are the same folks who sit at the front of the class and turn in the extra assignments because they believe a 101 is better than a 100. Meanwhile, I’m like, what’s wrong with a 90? Or an 85? I have more free time and way more friends, and we both move on to the next grade.

I’m covering some insecurities, here. I struggle with the Bible, if I’m honest. I don’t struggle with its contents. There are powerful and transformative stories on the spilled ink of Scripture.

I struggle with the Bible because I mistrust my motives. I grew up in a denomination that took the Bible seriously. It was central to my upbringing, and that has some benefits. It gives you a foundation, a source of security, something inspired by God, the very words of God, as I was told. Everything you need is in there, a Christian Swiss Army knife, minus the corkscrew because you can’t drink alcohol and love Jesus, not according to the Christians I grew up around. Folks in my Christian circle would brag about reading nothing else but the Bible, as if books were unnecessary and even contrary to the life of a devoted Christian.

There is a downside, though. When you devote so much energy to something like the Bible, you will inevitably defend its contents to the detriment of the people around you. I believe it was Ghandi who said people of the Book risk putting the book above people. That’s what happened to many folks in my denomination. That’s what happened to me. If you didn’t draw the same conclusions about the Bible as I did, you became my project. My goal was to convert you, not love you.

And here’s the thing: our rightness wasn’t that right. That is a terrible sentence, I know, but you get the point. As a pastor, I spent years evangelizing young people, baptizing them in my group’s ways of seeing the Bible, and now, I’m not sure I believe much of what I taught. No, I am sure. I don’t believe it.

As you grow, your worldview changes. It evolves. As it does, you realize what you believed about the Bible is an extension of your worldview. Everyone reads Scripture with his or her own set of glasses, the lenses of which painted with biases and prejudices and so on.

Here are six lies I used to believe about the Bible.

1. THE BIBLE IS INERRANT

Inerrancy is a long-held Christian belief that says the Bible is without flaws, a belief that, once you ascribe to it, you find almost impossible to sever from your psyche. And you will defend this belief as if you’re defending God himself.

I used to believe the Bible was without error. I don’t believe that anymore, mostly because it’s untrue. The Bible is NOT perfect. It’s not. It’s riddled with errors. And that’s okay. We’ve been duped by our culture to believe we need the Scriptures to be perfect for them to be profitable to our spiritual growth. We don’t.

The Bible is a collection of inspired stories that reveal a scandalous reality: the Creator of the Stars chooses to stoop down and interact with his creation.

Here’s my bigger issue with inerrancy, though. Once you believe the Bible is perfect, you’re forced to defend it. Do you have any idea how much energy and mental gymnastics are required to uphold inerrancy? We could’ve spent that time meditating on the unfolding character of our Creator. We could’ve spent that time asking deeper, more transformative questions about God and about ourselves.

Instead, we settled for inerrancy. We settled there because we needed security. We needed to know we were right. We needed an authority, and we needed that authority to be perfect. So, we made the Bible into an idol. We molded that idol into our own image, a reflection of our values and prejudices, and we told the world if you don’t bow down to our idol, you’re lost for eternity.

We can do better. We must do better. The Bible isn’t perfect. It doesn’t need to be. If you can tear down the idol of inerrancy, I promise there’s a deeper, more meaningful reality waiting on the other side.

2. THE BIBLE IS THE FOURTH MEMBER OF THE TRINITY

Here’s the issue with elevating the Bible to a supernatural state. Once you do this, unredeemed, manipulative people can use the Scriptures to fulfill their own agendas. And they have. The Bible has been used to support the extermination of Jews by Hitler and the enslavement of millions in America, among many other heinous things.

When the Bible is equal to God, all you need to do is find the verse that supports your agenda and combine it with some bravado, and you can convince anyone that it says anything.

The Bible is not the fourth member of the Trinity.

3. THE BEST WAY TO READ THE BIBLE IS LITERALLY.

Did God create the earth in seven actual days? Did God really flood the earth? Was Jonah swallowed by a large fish? I don’t know. But I want you to know that’s not the point. When you read the Bible literally, you miss the larger truths of Scripture.

Let’s take the story of Noah, for example. Many ancient civilizations had flood stories, and those stories were striking similar to the one in our Bible. God is angry. God floods the earth. Everyone dies. What’s different about our story, though? It doesn’t end with God’s anger. God sends a rainbow and grieves over the loss and promises never to flood the earth again. The story of Noah is not a story about what happens when people become evil (God will strike you dead!). This is a story about how God desires to engage with his people despite their brokenness, about how he never gives up on them, even when things seem bleak. That’s a great and powerful story, don’t you think?

When you read the Bible literally, you miss the deeper, more transformative realities of God. You spend so much time trying to defend the words on the page you have no time to engage with the Word the pages describe.

4. THE BIBLE IS A BOOK ABOUT HOW TO BE A GOOD CHRISTIAN.

The Bible is a book about how to be a good human, not a good Christian. This was a huge shift for me. I used to believe the Bible showed me exactly how to escape hell and then how to prove to everyone else that my understanding of God was superior to theirs.

It’s very possible to be a good Christian and a terrible human. You probably know some. Hopefully you aren’t one. It’s nearly impossible, however, to be a good human and a bad Christian.

The Bible, over and over, shows us how to treat and love one another. God implores his people to care for the outcasts, to love their neighbor as themselves, and so on. Jesus, himself, ate and drank with prostitutes and tax collectors. He didn’t judge or condemn them because that’s not what a good human does. Good Christians judge and condemn. Good humans love.

Read the Scriptures to become a better human.

5. THE BIBLE SAYS IT. THAT SETTLES IT.

I once heard someone say only transformed people can be entrusted with inspired writings. I think this is true. No one just reads the Bible. You always, always bring your biases and prejudices to the spilled ink of Scripture. And if you haven’t done any work on yourself, if you haven’t exorcised the demons in your closet, they will play a role in your interpretation of the Bible.

The Bible says it, I believe it is a flawed perspective, void of self-awareness. Self-aware people understand they have shadows and blind spots, and you bring those to the pages of Scripture.

6. GOD NO LONGER WORKS THROUGH HUMANS THE WAY HE DID IN THE BIBLE.

The same God who saved Noah from the floods and raised Jesus from the dead lives and moves in our world today. He hasn’t changed. He didn’t retire at the end of Revelation. The Bible should empower us to wake up and listen and pay attention.

I wonder if we know this, deep in our being, and we’re afraid to live into this story because we know it involves risk and unknown. We would rather keep our comfortable lives, so we marvel at the great characters in the Bible rather than realize they were normal people, just like you and me, who said yes to God.

God is writing a story of redemption and reconciliation, and that story continues today, and we’re invited to join. The Noahs and Moseses of the world are now me and you. The same God who led the Israelites out of Egypt continues spilling ink on the pages of time, and he continues to ask us to do the impossible. He asks us to join the Great Narrative, the coming of heaven to earth.

I don’t bother with Bible reading plans anymore. When I open the Scriptures, I want to encounter God, not check a box on a spreadsheet. I want to remember how God engages with ordinary, broken people, people like me. Then I want to close it and ask God to give me the courage to say yes to whatever he wants to do in my life right now, in this moment.

The Bible is a beautiful, transformative story about the character and nature of God. I want to join the story. I hope you do too.

Liminal Space and What Happens When You Love Certainty