Home Faith Why We Need To Stop Praying and Start Listening 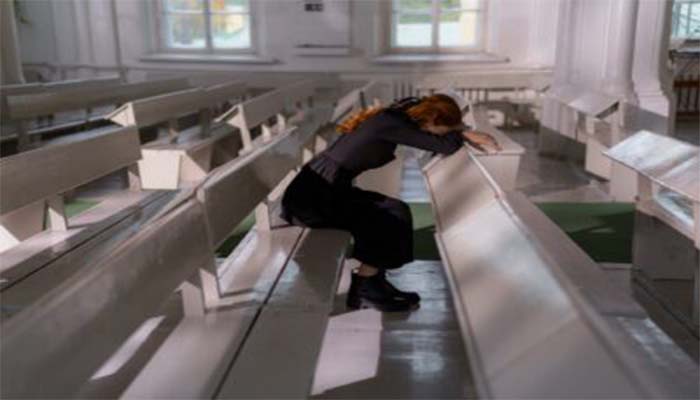 Why We Need To Stop Praying and Start Listening

I went to church before I entered the world. That’s what I tell people sometimes. It doesn’t make sense. When I say it, though, everyone understands. Church is in my DNA, which can mean a lot of things. For me, most of those things are good.

Of all the things I remember about church as a young lad, what I remember most is a man named Enos Morrow. Enos was the logo for an old man. He was short and thin, his hair full around the sides and thin up top. His pants rested just above his waist and didn’t reach his ankles. He only wore light blue button-up shirts, sometimes underneath a navy blazer, sometimes not, and large glasses with a lanyard. And, of course, Enos had the penultimate old man quality: a road named after him, a road which wasn’t a road at all, but a driveway connecting the highway to his home a few hundred feet off the road. You’re not an old man until you name your driveway after yourself.

What I remember most about Enos, though, has nothing to do with his old man qualities. I remember Enos’s prayers. Enos often led the opening prayer at my church, and, goodness, Enos could pray. I’m not sure what he said. I was twelve. I wasn’t concerned with the substance. The impressive part was the length. Enos could pray for a long, long time. And he did. I know because I had a stopwatch and timed him. Every Sunday, me and a friend would see if Enos could break his previous record.

Last week, he went five-and-a-half minutes, I would say. There’s no way he tops that today.

I bet you a Cal Ripken Jr. baseball card he goes over. My friend would respond. We would shake on it, and that’s how it went every time Enos stepped to the podium.

His all-time record was around eight minutes. I gasped an audible “Wow” after he said amen, and maybe even clapped a time or two.

I don’t mean to disrespect Enos or prayer. I bring this up because, now, as a man who has followed Jesus for thirty-six years, I marvel at Enos. I could never pray like that.

I’m not good at prayer. Look, I know. Prayer isn’t a competition. I should never put my words to God up against another’s. But I do. You do too. I have listened to men and women pray over the years, people whose prayers could start a revival. You know someone like this, I’m sure. Every time he or she prays, the hairs on your arms stand at attention. You can’t confirm it, but you swear the mountains slid an inch to the right.

I can’t move mountains or even ant hills with my words. I can ramble on for a minute or so. Then I begin repeating myself. Any time I pray in front of people, I feel anxious and insecure. I say words, trying to arrange them in such a way as to build momentum and play on the heart strings, and all the while I feel like a fraud. Why am I talking like this? I don’t pray this way when I am alone.

I concluded at some point that prayer was not my thing, so I stopped doing it. I left prayer to the Enoses of the world.

Then, I got really sick. And for a long time, I was in the bed, alone, just me and my thoughts. It was a hard, dark time. Suffering, though, has a way of revealing worn-out ways of seeing God and the world. In my plight, I began to wonder if prayer was something more than speaking words to God. I wondered this because, in my darkest days, when I pondered giving up on life, I heard something. I heard a voice that came from the depths of my soul. And this voice said the same thing again and again: “Everything is going to be okay.”

That sounds like a trivial thing to hear from God. And for most people, it probably is. For me, however, it wasn’t. It was a miracle. It was a miracle because everything was the opposite of okay. The voice told me what I needed to hear, words that calmed the turbulent waters of my heart and mind.

I’ve come to realize that our understanding of prayer is one-sided, at best. We are an extroverted culture. We talk a lot. We find little value in things like silence and stillness and listening.

Prayer, it turns out, is not just about talking to God. I’m not even sure it is about talking to God at all. That sounds blasphemous to an extroverted culture. Our approach to prayer, though, reveals something about how we see ourselves and God’s presence in our lives. It reveals that we are the star of the show, and God’s role is to come alongside us, to listen as we speak words to him and then respond to those words.

We are not the star, though. The story belongs to God. He is the Author, the Editor, and the Publisher. The story began long before we plunged through our mother’s birth canal, and will continue long after someone buries us in the earth. We would do well to remember this.

God has a message for every culture, every generation. The message is both timeless and unique. God wants to tell us things about how to live in these times and how to find deep, lasting Life. But we’re too busy talking. We’re too eager to say words, and God, the ever patient Father, sits there with a smile on his face and listens intently to every syllable from our mouths. But I also think God is waiting on us to finish talking so he can tell us something important, something that might transform our existence.

The creator of the stars wants to hand us a priceless treasure, and we’re like, “God, that jewel is blinding my eyes. Could you put that away until I finish telling you about Sally from work? She has carpel tunnel and she said it’s getting worse and she’s been to doctors and they can’t help her. Can you help her?”

I’m not trying to belittle what we call intercessory prayer. But c’mon. God is trying to hand us something that could change our lives. God wants to give us that gift, the gift of himself. He wants to speak to us. He wants to inhabit our heart and mind with his love and peace.

Those simple words God spoke to me, “Everything is going to be okay,” saved my life. I heard them in the midst of one of the darkest seasons of my life, when I pondered taking my own life. Those words delivered me from despair. Since then, I’ve wondered whether God has always tried to speak to me and utter words that would save my life or drive me into a fuller understanding of it, but I was too busy talking. He is, I believe, always trying to speak, and the words he’s trying to say will save us. They will awaken us.

Maybe there is a time when we need to talk to God. But it’s prideful and presumptuous to speak to God without first listening. I believe Eugene Peterson said that. Our refusal to stop talking and listen is a reflection of our anxious and distracted culture. We assume long, articulate words spoken in a certain context and bookended with “Dear God” and “Amen” are the best kinds of prayer. They’re not. The best kinds of prayers are the ones where we say nothing at all, where we close our mouths and humble ourselves before the Ancient One.

What does God want to say to us? I don’t know. But I know he has something to say. Do we care to listen?

Lynn, thank you for the kind words. Blessings!