Home Culture Buffalo, White Supremacy, And The Great Sin Of Our Generation 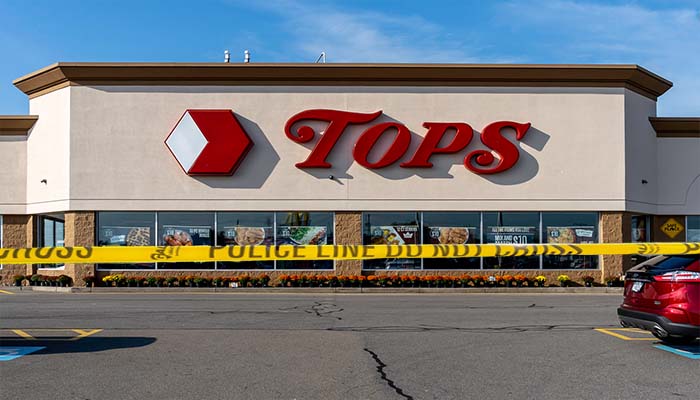 Buffalo, White Supremacy, And The Great Sin Of Our Generation

My heart aches for the families who lost someone they love in this evil, heinous act by a young man brainwashed by racist fantasies, fantasies fed to him by far-right media. I hate using that vernacular – right and left. It carries so much baggage. But I searched for better language and found none.

To the black community: I’m so sorry. Tears stream down my face as I scribble these words. I can’t imagine the pain you feel. I’m a white man who lives a comfortable life. I don’t know the deep anxiety you harbor for yourselves and your family as you spend your days in a country where the system has failed you. Who can you trust? Not the police. Not the government. Not even your neighbor. I’m so sorry.

This young man drove out of his way, fueled by a cocktail of hatred and racism, and intentionally targeted the black community. Let’s not pretend this isn’t our fault. It is.

Our silence condemns us. We live in a time where silence is no longer an option. If you refuse to speak out against these racist acts and the ideologies that fuel them, you’re guilty as well.

“To remain silent and indifferent is the greatest sin of all,” writes Elie Wiesel, an Auschwitz survivor.

“Indifference to evil is worse than evil itself,” says Abraham Heschel. “It is a silent justification affording evil acceptability in society.”

Martin Luther King says, “The ultimate tragedy is not the oppression and cruelty by the bad people but the silence over that by the good people…There comes a time when silence is betrayal.”

Indifference is a virus that infects the soul, drains it of love. Many white people are sick from this virus. I’m sick from it. We’re sick when we hear that a white man targeted and killed black people and feel bad for a moment, then carrying on with our lives. We’re sick when we see a young black man killed by the people hired to protect him, and our first thought is to defend the killer. We’re sick when we watch and support media outlets that feed racist ideas and defend our consumption of such garbage because they also support our views on abortion or gun control.

It’s sad how many Christians say they’re pro-life until their stance bumps up against their privilege. Then their hypocrisy is exposed. They’re not pro-life. They’re pro-abortion, which is fine. But do the lives of those killed in shootings like Buffalo not matter as much as they ones who haven’t been born? Of course they do. God values all life, and equally, not just the lives of the unborn.

Why, then, do we not fight for these lives with the same vigor? I think I know the answer, and it grieves me to say it.

We fight with such passion for abortion because the unborn are an easy group to fight for. The unborn don’t ask anything from us. They don’t have opinions or political views. As Pastor Dave Barnhart says, “You can love the unborn and advocate for them without substantially challenging your own wealth, power, or privilege, without re-imagining social structures, apologizing, or making reparations to anyone. They are, in short, the perfect people to love if you want to claim you love Jesus, but actually dislike people who breathe.“

I’m not saying we shouldn’t fight for the unborn. We should. But let’s not fool ourselves into thinking we’re pro-life. And let’s not pretend we’re on the right side of God’s favor because we fight for this group, while everyone who doesn’t agree with us is evil and wrong. What about those who fight for the men and women who died in Buffalo, giving time and energy to prevent the next mass shooting? What about the people who fight for gun reform? Are they not fighting for life too? Is God not fighting with them?

And about gun control. For the life of me, I can’t imagine how men and women have access to the types of weapons that allow such atrocities. I’ve heard people say guns aren’t the problem; mental health and broken homes are the issue. Fine. Maybe you’re right. But when I was addicted to porn, the first thing a counselor instructed me to do was place as many barriers between myself and the media as I could. Site blockers. Passwords. Make it as difficult as possible to access the thing that’s destroying you, he said. In the meantime, we would address the mental and emotional reasons behind my addiction.

So, that’s what I did. And, to my surprise, the barriers made an enormous difference. It’s shocking how the mind stops fixating on something when it realizes the energy necessary to acquire it.

Is the same thing not true, here? Mental health and extremist people will walk the earth as surely as the sun rises. We need to address mental health. In the meantime, though, should we not take steps to make it as difficult as possible for people to acquire weapons that can kill large amounts of people? We should. And we must.

It seems like the generations in power today don’t have the courage necessary to make such changes, though, so I want to challenge and pray for the next generation, that they will have the gumption and mental fortitude to do what our generation could not – enact laws that keep mass killing devices from reaching the hands of mentally unstable and racist people.

Today, my heart hurts. For the black community. For humanity in general. Even for the young man who shot and killed those people.

My whole life, I’ve heard Christians pray for God to heal our land. I pray that too. But, too often, this prayer is yet another form of spiritual bypassing. We speak words to God and wipe our hands clean of the matter, and meanwhile, I wonder if God looks at us and says, “I’ve given you everything you need to heal. Why aren’t you taking action? Why aren’t you using your voice, your resources, your privilege?”

So, today, I write these words, in faith, in love, hoping and praying something good will come from them. Maybe so. Maybe not. Either way, I can’t remain silent. I refuse to sin in this way, and separate myself from my God and my neighbor.

Indifference is the great sin of our generation. May we have the humility to repent and the strength to change.