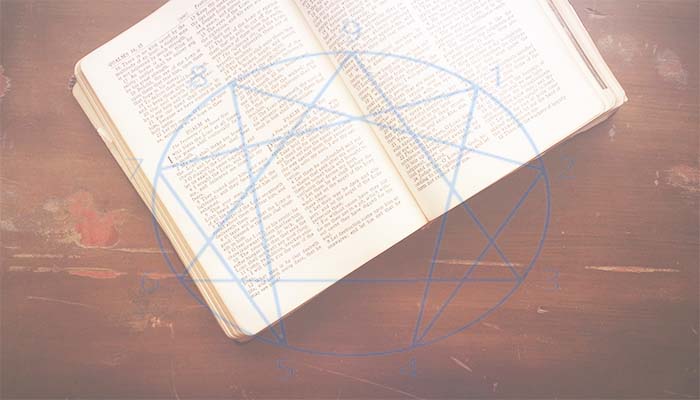 Your Favorite Bible Character According to Your Enneagram Type

As I said in my previous post, the Enneagram is the most powerful spiritual growth tool I know. It’s also the most humiliating, which is proof that it works. Before the truth sets you free, it tends to make you miserable, as Richard Rohr once said.

Whether you’re a devoted disciple of the Enneagram or a novice, we tend to understand ourselves by looking at the lives of others. Fortunately, the Bible gives us many examples of how to walk with God, for better or for worse.

In this post, I want to give you a biblical character for every Enneagram number, as well as a few famous people from both real and fictional life.

Ones tend to see the world in black-and-white. They have a strong moral compass, a clear picture of right and wrong. Because no one meets their high standards (standards they first impose on themselves), Ones often wrestle with anger. Expressing anger feels wrong, though, so Ones rarely show their anger. Instead, it comes out as resentment, which is anger expressed in a passive-aggressive way.

The Biblical character most associated with this type? This is the most obvious selection of them all. The apostle Paul. Paul loved the law. He was a Pharisee. He believed in his moral stances with such ferocity that he was willing to murder people. Then, of course, Paul meets Jesus on the road to Damascus, and everything changes.

Once he starts following Jesus, we begin to see what a transformed One looks like. He gives up his murderous ways, but not his passion for a just world. Paul is an excellent character study for Ones. You see clearly his dark, unhealthy side. You also see clearly how Paul transforms his life once he connects with the Source of Life.

Twos can walk in a room and identify the needs of every person without saying a word to anyone. Twos are givers, which is noble, until you learn why. Two give as a way to avoid their own needs. The giving is also manipulative. They give hoping to receive, but they never come out and say this, so bitterness can often build in Twos.

The apostle John is a Two. John is the only apostle who remains with Jesus at the cross. John’s gospel (as well as his letters) focus on love. Richard Rohr points out that, although John emphasizes love, his love is exclusive, focusing on the “brothers.” John does not talk about loving enemies in any of his writings. So, you see the good and bad with a Two. They can give selflessly. But they can also be possessive and exclusive.

Threes are the go-getters, the workaholics, the doers. They craft an image of success and importance and avoid failure like the plague. They often wrap their identity around their job title or accomplishments.

Richard Rohr says no one in Scripture embodies their Enneagram number more completely than Jacob. In this case, Three. You can find his story in the middle of Genesis. Here you see a man willing to do anything to succeed, and it begins in the womb, when he fights with his older brother, Esau. Later in life, Jacob comes up with a plan to steal Esau’s birthright. As his father, Isaac, rests on death’s door, Jacob covers himself in wool and appears before him. After stealing the birthright, Esau’s anger forces Jacob to flee his home. On the journey, he has a dream that includes (wait for it) a ladder. Ascent and descent, climbing up and down ladders. Threes love language of this sort. Jacob’s entire life is about gaining and appearing successful.

Fours are creative and emotional. They’re in touch with the dark side of life, unafraid to travel to the depths of things. They always feel like they’re missing something, though, which creates a lifetime battle with envy. Fours are fixated on being special, different, and authentic.

Following the Four’s desire to be special and distinct, Joseph dreams on two separate occasions that his brothers will bow down to him. As you can imagine, this doesn’t go over well with his older brothers. In fact, they dislike his message so much that they devise a plan to kill him.

Fast-forward a bunch of years. Joseph, after a serious of jailings, rises up the totem pole in Egypt. He’s second in command and a famine descends on the land. His brothers travel to Egypt hoping to find food. They find food, but they also find Joseph, although they don’t recognize him. Joseph, rather than revealing his identity to his brothers, tests them. After much hoopla and, to be honest, too much drama, Joseph reveals his identity. As a Nine, this whole approach to revealing himself seems unnecessary and grossly over-dramatic. But I guarantee Fours don’t feel this way.

While you see the emotional and dramatic side of Joseph, you also see the power of a redeemed Four. When healthy, they can change the world.

Fives tend to observe reality rather than engage with it. They see the world through a lens of scarcity. This leads Fives to withhold time and energy, especially from those closest to them.

The apostle Thomas, one of the Twelve, is a great example of a Five. After Jesus’s resurrection, the disciples run to find Thomas and once they do, they tell him that Jesus is alive. Thomas, however, doesn’t believe it. In that infamous passage in John, Thomas says, “Unless I see the nail marks in his hands and put my finger where the nails were, and put my hand into his side, I will not believe.” Classic Five response.

Fives are skeptical and analytical and wrestling with anything that defies logic. Jesus, in his grace, doesn’t withhold the nail marks from Thomas, but draws him near and shows him. Thomas then believes.

His letter, The Gospel of Thomas, isn’t in our traditional Bible. You should read it though, especially if you’re a Five. His words paint the picture of a redeemed five, a man who didn’t allow his logic to override his faith.

Sixes are loyal and practical and driven by fear. They often use worst-case scenarios as a defense mechanism against accepting the chaos of life. Sixes often attach to authority figures or strong leaders as a way to find false security.

Ruth is a symbol of loyalty. After her husband dies, Ruth defies her mother-in-law’s plea to return to her homeland. Instead, Ruth vows to stick with Naomi, saying, “Where you go, I will go; where you lodge, I will lodge; your people shall be my people, and your God my God.” She follows Naomi to Bethlehem, where she meets Boaz.

Because of Ruth’s deep sense of devotion to those she loves, she becomes the great-grandmother of King David. Ruth is a picture of what a healthy Six looks like. They will not abandon those closest to them for any reason. Once you make friends with a Six, you have a friend for life.

Sevens are fun, spontaneous and adventurous. They hyper-focus on the positive and sunny side of life in an attempt to avoid pain.

King Solomon is a great example of what happens when an unhealthy seven follows his impulses. Solomon begins his life in a sober way, asking for wisdom, rather than fame or wealth. God grants his this wisdom, and with it, he also acquires fame. As his life progresses, though, he becomes addicted to lust and self-indulgence, as he gathers more and more, amassing a storehouse of trinkets and hundreds of wives. He never seems satisfied. The Lord tries to warn Solomon, but he’s too far gone. In the end, he builds shrines to neighboring gods and worships them.

Eights are commanding, intense and confrontational. Act now, apologize later is an Eight’s motto. They fight for justice and advocate for the powerless. But they also struggle to admit weakness. They can domineer over people. Their greatest fear is vulnerability.

John the Baptizer gives off a strong Enneagram 8 vibe. He is direct and confrontational, not afraid to attack the spiritual leaders of his day. John was a trailblazer. He forged his own path. He didn’t care what those around him thought about him. Strong, confident, independent. John embodies a healthy or reformed eight, someone who uses their energy and strength for justice and healing.

Nines avoid conflict. They lack focus and drive. They have the least available energy of any number on the Enneagram. When healthy, though, Nines are a healing, calming presence. They know who they are and aren’t afraid to use their voice.

Jonah, the reluctant prophet, is a Nine. As a Nine, I have always felt a connection with Jonah, even before I knew the Enneagram was a thing. I identified with his resignation about preaching to a godless people, his desire to run away from the thing God calls him to, and his anger when the thing God calls him to actually works. Jonah has a nagging slothfulness that follows him through every scene in his story. God has to force Jonah’s hand by throwing into the mouth of a fish.

If you want to see the pitfalls of a Nine on full display, read Jonah.

A Light Brighter Than Evil: A Short Story

9 Microhabits That Will Transform Your Spiritual Life

6 Important Truths For Anyone In A Season...