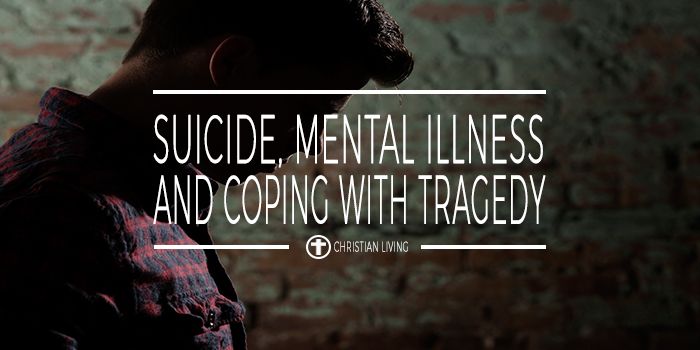 Could a Christian really do this? And not just any Christian, a good one. Jesus was real to this man. Christianity wasn’t a silly American game he played to get ahead. He believed every word in the Bible. He practiced those words. He told others about them. I saw this with my own eyes.

In the moments after Tiffani dropped the phone, those thoughts raced through my head, along with a few thoughts that wouldn’t fit in a blog post. This was the phone call everyone fears. “(Fill in your name), your brother, sister, spouse, child, mother, father, grandmother, grandfather is dead.”

Nothing prepares you for that moment. Nothing. Worse still was the cause of death.

Writing the word is hard. I deleted it three times, wanting to replace the word with another, one with less sting and stigma. I still can’t believe it.

I grew up in the Bible belt, and my fellowship squeezed the belt tight. The Bible “spoke clearly” on almost all matters of life. On the matter of suicide, the “Bible clearly said” it was sin. Even worse, suicide was the only “unrepentable” sin. Suicide meant death, like the forever kind.

For the record, I don’t believe suicide eternally separates anyone from God. Even as a teenager, I struggled with this narrow, “black and white” application of a complex issue. Years later, after bouts with depression and anxiety, I’m even more convinced. In our desperate search for certainty on all matters of faith, we’ve bound where the Bible does not.

Truth be told, the church hasn’t handled mental illnesses well. We’re getting better. But many still believe depression and anxiety are issues to overcome rather than illnesses to treat.

“Pray for God to give you peace”

“Here are some Bible verses to help you.”

These (and other) off-hand comments are closer to abuse than counsel. They need to stop.

I wonder how many have dug themselves a deeper hole or (God forbid) their own grave believing their mental illness was a lack of faith? Some forms of depression and anxiety are circumstantial. A different perspective or change in scenery will heal these forms. I’m not talking about circumstantial stuff here. I’m talking about mental illnesses that hover over you like a tornadic thunderstorm, with clouds so thick you can’t differentiate between day and night. Christians with this type of illness aren’t lesser or inferior. They’ve likely called on God more than most, desperate for a ray of light.

People with a mental illness wouldn’t dare say something like “just try harder.” It’s like telling a cancer patient to try harder. The words aren’t just misplaced. They’re dangerous. People defeat cancer with treatment, not effort. The same is true with mental illnesses. Yes, God can heal miraculously. And I believe he does. But He doesn’t heal based on merit.

Suicide needs darkness like the kind described above. It must get you to the place where light isn’t visible. This kills your hope. It also needs to press around so tight you can’t see your hand in front of your face. This kills your perspective. It’s here, in this place, with no hope or perspective, suicide speaks its evil lies. “No one would care if you died. Your life is worthless. You will actually do everyone a favor.” Suicide is a choice, of course. But it tells you there’s no other choice. In that moment, giving up feels like joy. Waving the white flag looks like a win.

I knew my wife’s grandfather well. He played a vital role in the faith of my wife’s parents, and because God used my wife to awaken me to Jesus, I might not know Jesus today without this man. Yes, the one who took his life.

The days following his death have been hard. Death stings, but not like a bee sting in the backyard. I would choose dozens of bee stings over this pain. This sting reaches into spaces I didn’t know existed.

When death strikes, it leaves a ripple effect of pain, mourning, and loss regardless of the form it takes. But there’s something different about suicide. Maybe we acknowledge death’s inevitability. Death knocks at everyone’s door, right? Good. Bad. Rich. Poor. Young. Old.

You can’t take death to a judge. It has no judge except God. You can’t reason with death or throw it all your resources, hoping it accepts your bribe. Throw the world’s smartest brains in a room. They best they will do is postpone death’s arrival for a short time with medicines, healthier lifestyles and such.

There’s nothing to do but accept death’s inevitability. So, we do.

But you never invite death before its appointed time. You never call death, and invite it over. There’s something innately human about protecting and preserving life, especially if you follow Jesus. This is why we fight for the vulnerable and helpless. Life and human flourishing are core principles of Christianity, as basic to our faith as water and food are to humanity.

When suicide strikes, mourning, pain, and loss are still there, just like any other form of death. But rather than reflecting on “what was,” everyone asks “what if”. Suicide is so sinister because it tells its victims their lives are worthless, and it tells those left behind they’re responsible.

“If you called more, showed up more, not said that, said that, or whatever, this person would still be alive.”

To be fair, other forms of death make these claims. But not always. Many times, death is a celebration, as loved ones reflect on a life well-lived. My guess is suicide almost always brings feelings of shame and regret.

I saw this talking to my wife’s family. “Whys” and “what ifs” filled the room like confetti after a championship win. Except this wasn’t a win. For several nights, I stayed awake reliving my final few encounters with him. They were uneventful. We spoke only a few words in the final months of his life. What if I had spent more time with him? What if I told him his faith is the reason I’m following Jesus? Would this encouragement had given him hope, and maybe kept him from doing this? What if?

I’m not sure who I’m writing this article for. Maybe for myself, a form of therapy, if you will. But maybe I’m writing this for someone crippled by mental illness and suicidal thoughts. Prayer and a closer walk with God have healed many, but this isn’t your story. I struggle with anxiety. I have for years. God hasn’t miraculously healed me, but I’ve worked towards healing with renewed thought patterns and, at times, medication. If you’re crippled with darkness, you must choose life. It’s not easy, but you must. Choosing life might look like counseling or extended therapy. It might look like telling a friend or spouse about your suicidal thoughts. In my battle, I often choose to wallow in self-pity and isolation rather than ask for help. Don’t allow pride to keep you from life.

Maybe I’m writing this for loved ones of someone who committed suicide. Your fight is real as well. Maybe you made some mistakes. Maybe there’s something you could have done differently. You can (and should) learn from the past, but you can never live there. Visit a counselor if you need help processing difficult questions. If you believe Father Time will do the trick, that’s fine. But you can’t allow “why” and “what ifs” to plague your life. You can honor the person you lost by raising awareness around mental health.

Maybe I’m writing this for the church. I love the church so much. But we must do better. Mental illnesses are complex and unique. It’s time to close our mouth and open our arms. The church isn’t a repair shop that fixes the broken, but a hospital that heals the hurting.

Fortunately, our Savior comes as a doctor, not a mechanic, the Healer, not the Fixer. The church must be a place where everyone, including those with mental illnesses, is welcome. We must be the people who come alongside those struggling with suicidal thoughts.

On Sunday, May 1st, we buried him. May is, ironically, Mental Health Awareness Month.

Before concluding the funeral, the man giving the eulogy said this.

I think he quoted a poem. Regardless, those words will always be with me. I think they’re true. And I imagine my wife’s grandfather will hear these words when he stands before God. I imagine you and I will too.

4 Signs Of Humility In A Self-Absorbed Culture

9 Things I Wish I Knew When I Graduated

[…] have the power to take it himself. I’ve thought often about Tiffani’s grandfather. He committed suicide recently. If you believe someone is being selfish on this side, the life side, of suicide, you’ve […]

[…] the past year, I resigned from church ministry, mourned the suicide of a family member (and follower of Jesus), found and quickly lost a “dream job,” mourned the death of, Matsy […]

[…] the past year, I resigned from church ministry, mourned the suicide of a family member (and follower of Jesus), found and quickly lost a “dream job,” mourned the death of, Matsy […]