Home Faith How To Respond When Life Knocks You Out 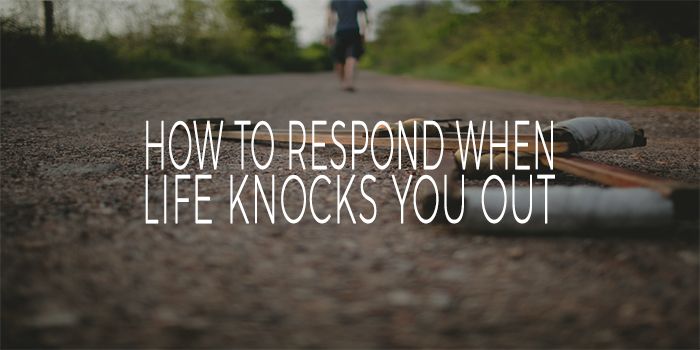 How To Respond When Life Knocks You Out

Life can be cruel, striking violently and without warning. The force of the blow can leave people dazed and confused, unsure how to move forward. I’ve been around long enough to witness this.

But I didn’t expect to experience it firsthand, not this year, anyway.

Yeah, 30 matters to God. As my 30th birthday approached, I prepared to hear from God, anticipating a word of clarity.

Two months later after my 30th birthday, I resigned from church ministry. The decision was hard, but necessary, I thought. This was God paving the way for something special. The next six months, I was unemployed, but optimistic. I used the time to blog and refine my writing skills, believing the next leg of my journey would include writing.

I was right. Kind of.

God opened a door, an opportunity far beyond anything I imagined, a “dream job,” if such a thing exists. I would write full-time, collaborate with an amazing group of Christ-followers, and learn under a wise, seasoned writer. It was an “AHA” moment. My journey unfolded. I could see how God prepared me for this moment. For years, God had been grooming me and preparing me for this. I was ready.

Two phone interviews and an on-site interview later, I accepted the job. I would work remotely for two month as a contract employee writing exclusively for two websites. Afterwards, both sides would reassess and determine next steps.

For me, the whole thing was a no-brainer. I would be relocating in two months. God prepared me for this. The timing was right, and a few weeks of writing would clear the air. In time, God would show everyone the picture I see clearly.

Except they never saw it.

On Monday, the start of my fourth week, I sat down at Starbucks, opened my default writing program, and prepared for a day of writing. Then, my supervisor called. I answered, expecting to discuss ideas for future articles. Instead I was told that after several internal discussions, the team decided not to hire me full-time.

I was floored, thinking and hoping this wasn’t real. It couldn’t be real. I saw the picture, God’s picture. He prepared me for this.

After the call, I stared at a blank screen. The cursor blinked angrily at me as if to say, “Why did you wake me only to leave me idle? Start typing.”

I had nothing to type. I was unable to move, paralyzed by shame. I’m not sure I had ever been this embarrassed.

This is what it feels like when life kicks your a**, I thought. Maybe that sounds vulgar, but sometimes life is vulgar. I was blindsided. My confidence was shattered and my identity severely wounded. There was no politically correct way to describe this.

I’m still picking up the pieces of my confidence. I still have more questions than answers. But I’ve learned a few things about responding after knocks you down. I want to share those with you.

1. Life doesn’t owe you anything.

Life operates under no guiding principles.

But life isn’t obligated to play by these rules. Educated people wind up homeless (I met one several months ago). Health nuts and gym rats die from cancer. At any moment, life can “happen.”

I deserved this job, I thought. I can’t count the number of hours I spent learning the ins-and-outs of website design, writing blog posts, and creating engaging content. I sacrificed many afternoons. I could have been golfing, working on my yard, or playing with my boys. But I chose to write.

Life didn’t much care how I sacrificed.

Here’s the reality. Life doesn’t owe you anything. Not a job. Not a picturesque family. Not physical health. Nothing. As long as you expect life to play by the rules, you will struggle to find joy and peace. I suspect the people who trust God and are unaffected by the latest breaking story understand this.

2. The past is for learning not living.

When life channels it’s best MC Hammer and goes hammer time on your hopes and dreams, you will ask a lot of questions. Many will start with the words “What if”. What if I did this different? What if I made a better decision here? What if… What if… What if…

If you made mistakes, learn from them. If you need to apologize, do so. But don’t build a home in the past. The past is a point of reference, not a place of residence.

Once you identify mistakes, come back to the present. Immediately. If not, you will live in your past rather than learn from it. When you live in the past, you’re next door neighbors are regret and bitterness. And they visit everyday.

Reflecting on my journey, I made mistakes. I could have prepared better for interviews or worked a few hours longer.

Maybe a better decision here or there means I’m hired full-time rather than unemployed. But it’s mere speculation. I’ll never know. Instead, I’ll stay in the present and, using the past as a reference point, learn from my mistakes. When another opportunity comes, I’ll be better prepared.

Life can (and probably will) knock you down. It can steal everything…except for your soul. I’ve heard the whispers, the evil one telling me to give up. He whispers because he doesn’t have the power to take it himself. I’ve thought often about Tiffani’s grandfather. He committed suicide recently. If you believe someone is being selfish on this side, the life side, of suicide, you’ve never had life beat you in the ground and stand over you laughing.

Ultimately, however, I have a choice. So do you.

If you’re in a dark place, coping with terrible loss, understand this. Life can’t take eternal things from you. The fruits of the Spirit (love, joy, peace, patience, kindness, goodness, faithfulness, gentleness, self-control), your identity, those things are eternal. Life can’t take those.

Love, joy, peace, etc. are choices. They exist regardless of situation.

When life smacks you down, it wants you to look at the impossibility of your hopes and dreams. It tells you to focus on what you wanted to do with your life and how that’s no longer possible.

I’ve learned in this season, when my confidence is shattered and my life goals appear impossible, the most courageous thing I can do is get up.

Some days are easier than others. Some days are a dumpster fire. But I’ve decided to get up, every day. I love this verse in Deuteronomy. It’s been a companion of mine.

Today I have given you the choice between life and death, between blessings and curses. Now I call on heaven and earth to witness the choice you make. Oh, that you would choose life, so that you and your descendants might live.

The Christians I know don’t discuss emotional health. Our response to emotions, especially hard ones, is “trust God more.” The answer is good and true, except it doesn’t seem to work. I’ve seen a lot of emotionally unhealthy Christians, starting with the one in the mirror.

The “suck it up and move on” mantra might work for robots and machines, but it’s toxic for humans. We’re emotional beings. God created us this way.

Since that dreaded phone call, I’ve experience a wide array of emotions. I’ve learned that the suppressing hard ones isn’t noble.

Stuffing or suppressing emotions doesn’t make them go away. They simply build deep in your soul, choking out joy until some external event, usually minor, serves as a “tipping point.” What comes next is a volcanic eruption of bitterness, anger, and shame.

Suppressing emotions isn’t courageous. It’s toxic. Courageous people are vulnerable. They don’t “have it together.” That’s a pipe dream. They would rather have their joy. And don’t be fooled, you can’t “have both.

5. If you don’t transform your pain, you will transmit it.

Who did this? Maybe you’re wondering. I would be lying if I said I didn’t battle anger towards the people who let me go. But that’s not the point.

“If you don’t transform your pain, you will always transmit it.” I’m not sure who coined the phrase, but I first heard it from the lips of Richard Rohr.

When pain shows up, whether it’s the loss of a loved one, a job, whatever, we typically respond one of two ways: we scapegoat the pain (blame someone else) or we pull the victim card. Both give us power (false power, but power nonetheless), but neither fixes the problem.

At the cross, however, Jesus provides a third option: transform the pain. Though he was killed without cause, he neither scapegoats his pain or pulls the victim card. Jesus doesn’t seek revenge. He doesn’t hold a grudge. Instead, he absorbs the pain, ending its vicious cycle.

The church doesn’t seem to understand this message. I don’t understand it. But I’m learning.

Was the company that let me go wrong? I don’t know. But I do know that’s not the point. They aren’t my problem. They love Jesus. They try hard to do his will. Of course they make mistakes.

The answer to my pain is Jesus.

Rather than talk trash about the people who let me go, I’ll pray for them. I’ll pray for God to bless them. And I’ll mean it. I’ll do my best to pray this everyday. And when it happens, I’ll send them a congratulatory e-mail.

I think there’s an important message at the cross for everyone, a message that’s unique to Christianity. It’s a solution to pain. There’s a way to break the cycle. Rather than transmitting pain to someone else or leveraging pain to gain power over someone, you give the pain to Jesus. This mean you must hold the pain for a period. It will hurt. You will experience anxiety and tension. But soon enough, God will take your pain and transform it into something beautiful.

Talk about a message the world is desperate to hear.

I have no idea what’s next. Maybe I won’t receive a clear calling from God at 30 like David or Jesus. I’m okay with that. I’m beyond this 30 or bust idea. God is bigger than that.

So, I’ll continue listening and trusting. I’ll give God the glory, good or bad. And when life knocks me down, I’ll get back up. I hope you will do the same!

8 “Christian” Virtues That Are Not Really Christian

Grieving The Loss Of Lovely: The Daughter I Never Met, But Will Always Love

Thank you very much for your blog.

I enjoyed reading this article.

[…] I resigned from church ministry, mourned the suicide of a family member (and follower of Jesus), found and quickly lost a “dream job,” mourned the death of Matsy Grace, our adopted Indian daughter, and battled a […]

[…] I resigned from church ministry, mourned the suicide of a family member (and follower of Jesus), found and quickly lost a “dream job,” mourned the death of, Matsy Grace, our adopted Indian daughter, and battled a […]

Absorbs the pain….does this mean Jesus internalized His pain?