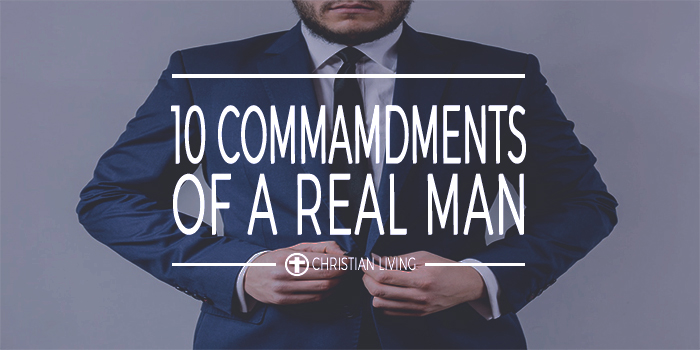 10 Commandments Of A Real Man

What is a real man? Think about our culture’s definition. Look at the movies. Read the magazines. Listen to the music. What do you see? Muscles, money, and women. A real man is tough. He doesn’t show emotions. He handles his own business. A real man has money. Who cares if he blows it on trinkets? The point is he has it. A real man has women. You can’t be a real man and not have a girl.

But what if our culture is feeding us a lie? What if our culture is grossly misleading us when it comes to the nature of a real man? Our high schools, colleges, workplaces, and homes are filled with men that are trying to be legitimate. The problem is we are looking for legitimacy in an ever-changing culture. A culture that is predicated on promiscuity and infatuated with the almighty dollar.

The cultural picture of real men is a facade. It’s smoke and mirrors. We must wade through all the charades and cultural stigmas. It’s a lot of wading. But once we dig below the surface, something different is exposed, something divorced from the cultural non-sense. Something grounded in the Truth, not a perceived one. Something…real.

Here are 10 commandments of a real man.

1.) A real man respects everyone.

A real man doesn’t trash talk or bad mouth other people. “But Frank, what about my teacher at school? Or what about my boss at work? They deserve everything they are getting from me and others.” Right…so tell me again what you deserve for all the awful things you have done to others? See…a real man finds no value in tearing down other people. He realizes these people are not much different from him. He also realizes God is not glorified in the tearing down of others.

2.) A real man builds up those closest to him.

Growing up, I saw men, too many of them, who used outings to the bar, the golf course, or the hunting camp as opportunities to talk about their wife’s failures and downfalls, tossing in the failures of their friends for good measure. But show me a man who builds up his wife and friends…and I will show you a real man. Why? A man who honors his wife and friends can only do so because he is confident in himself.

Guys, let me be real with you. If you date girls just to have a girl or you want sex, and you have no intentions of a long-term legitimate relationship…you’re a coward. That’s direct, yes. But it’s true. It’s real. If this is you, stop it. End the relationship. A real man respects the feelings and dignity of women. He does not see women as objects to fulfill his desires. He does not date because having a girl is fun or expected. There is intentionality behind his relationships.

4.) A real man works hard, but never chases a paycheck.

Laziness is a modern-day epidemic, no doubt. But the pursuit of a paycheck is also plaguing our country. A real man is not lazy. He works hard. But a real man never allows the almighty dollar to drive his hard work. A real man works hard because he works for God. The pursuit of a paycheck is turning men from husbands and fathers into distant figures whose lives have no greater purpose than a selfish lust after a large number in a bank account. How ridiculous. A real man recognizes the cultural lies and acts accordingly.

This allows him to work hard, rest hard, play hard, be present as a father and husband, and nurture his relationship with God. Make no mistake. Pursuing a paycheck at the expense of a family (and God) isn’t the mark of a real man. It’s the mark of a wasted life.

5.) A real man never chooses hobbies over marriage or family.

I love golf. I would love to play every day. I know guys who take Atlanta Tennis Lessons and love it. There’s nothing wrong with me having a hobby. But I also have two kids and a wife. I have a full-time job. I have a blog. And there are only twenty fours in a day. Something must go to the back burner. A real man understands that “something” is not his wife and kids, his job, or his relationship with God. There are seasons of life where golf, fishing, or hunting must take a backseat.

Hobbies are just that…hobbies. Extra. A real man never chooses a hobby over family or God.

I remember visiting Las Vegas for the first time. People there seemed to pursue sex and money like a lion who hasn’t eaten in several day. Women wearing next to nothing begged for the attention of those around. Sensuality and the objectification of women (and men) were impossible to ignore. We live in a sex-crazed world.

A real man doesn’t use this as a crutch to feed his sexual appetites. He values purity in his thoughts, conversations, and relationships.

For much of my life, I struggled to keep my mind pure. I thought lust was normal and uncontrollable. Boys will be boys, right? Wrong. Now that I am on the other side, I see that God’s intention for my life is not for my mind to be filled with lust. It’s not God’s intention for your life either. Lust is sin. A real man

7.) A real man is self-controlled.

If someone forces you to react, you are not in control of yourself. So, if another person’s actions force your hand…someone else is in control of you. That’s dangerous. A real man is not controlled by emotions. He is not controlled by others. Despite the lies of the world, this is true strength. Strength that comes from within. Strength that comes from God. Self-control breeds a life with less regret and more stability. A real man values self-control.

8.) A real man looks to God for his identity and worth.

A real man doesn’t look to the world for his identity, sense of worth, and strength. He draws strength from the Lord. God is the only source of lasting strength, and a real man acknowledges this reality. He then uses this strength to lead his family, run his business, and interact with his peers at school in a way that glorifies God.

If you turn elsewhere for strength, identity, and sense of worth, don’t be surprised if you find the ride exhausting and the goal unattainable. Riding cultural waves is dangerous, especially when you don’t know when the next wave is coming. Real men don’t ride waves.

9.) A real man celebrates the successes of others.

If you can’t celebrate the success of others, something is wrong. This dog eats dog cloud hanging over our culture is a lie. A real man celebrates with his friends, wife, and co-workers when something positive happens in their life. He is only able to do this because his identity is secure. A real man is confident in his own abilities and talents, so he is in a position to celebrate with others.

A real man works hard, competes hard, but is able to shake the hand of the other team if he loses. He can tell his co-workers congratulations if they get the promotion…and mean it. He can celebrate with his spouse when she excels at her job. Who cares if she makes more money or has a more important title? A real man isn’t in competition with his friends and spouse.

There is more than one seat at the table of life. Pull up a chair and let others sit down.

[tweet_box design=”default”]Life’s table has more than one seat. Pull up a seat and allow others to sit down.[/tweet_box]

Integrity. This word, maybe above any other, describes a real man. His relationship with God. His treatment of others. His actions and thoughts. Consistent.

A real man doesn’t sacrifice honesty on the altar of acceptability and approval. Even if honesty and integrity cost him a job, money, or a grade on a test, he won’t compromise. He is consistent. He is dedicated to the Lord.

Let me know what you think. Join the discussion by commenting below on some qualities I have left out.

Alive or Awake: How To See The World Rather Than Sleepwalk Through It

Wow. You are pretty much perfect. I hope some day the rest of us achieve your level of righteousness. Beware though. You mess up just a little bit and you become just another fake man like the rest of us. I am imperfect, fail often in my parenting, relationships, interactions, treasures. I am so thankful I have the incomprehensible grade of my Father to fall upon.