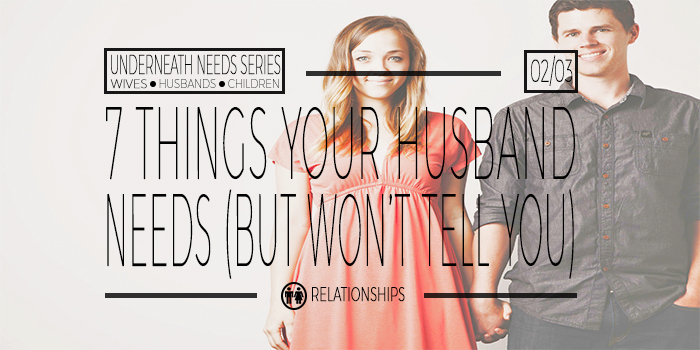 7 Things Your Husband Needs (But Won’t Tell You)

The first day on campus, my first class was Mass and Energy Balances. I moseyed in, grabbed a seat, and listened to the teacher speak in a foreign language for over an hour. After class, I marched straight to my academic counselor. Yes, I changed majors after one class.

With men, the story is similar. Culture paints every man with the same brush. Sex-crazed. Unaware. Irresponsible. Ignorant.

All engineering curriculums are basically the same, right?

While the cultural caricature of men generates laughs, it also dismisses their unique complexity. Every engineering curriculum presents unique challenges, and every man is uniquely complex. Men have legitimate needs. But most of them aren’t verbalized. So, I’m going to help.

Here are 7 things your husband needs (but won’t tell you).

1.) To provide for his family

Men are wired for provision. This desire is innate, giving to us by our Creator. Too often, however, we equate “provider” with “breadwinner.” While God created men with a desire to work (and work hard), the breadwinner ideology is American culture stuff, not God stuff.

In modern America, many women work and excel in their field. This was almost unheard of thirty years ago, but I have guy friends who stay at home with the kids while their wife works.

The point is this. Men, your wife might be the breadwinner for your family (my wife makes more than I do). But this says nothing about your inability to provide.

Providing is about creating an environment where those you love can grow. This includes finances, but it’s much, much more. Growth is multi-faceted. Here are a few examples of what it means to provide for your family.

The points above have nothing to do with money, but they’re incredibly valuable. They’re the ingredients of a healthy culture. While they may or may not produce men and women with full bank accounts, they will produce hearts and minds filled with love and joy.

2.) A teammate, not an opponent

From my fifth birthday until I graduated high school, I participated in team sports. I was on crazy talented teams and ridiculously awful ones. Here’s what I noticed. The most talented team rarely wins the grand prize. The team that plays together and sells out for one another almost always wins the gold.

In other words, a cohesive team trumps a talented team.

Cohesive teams support one another. They build up one another. When one teammate struggles, the others pick him or her up. Personal accomplishments and awards take a backseat to the team’s success. You get the idea.

The same is true for marriage. There is a rarely discussed, but very important, word in marriage…synergy. Strong marriages have great synergy. The two sides work together. The desires of the husband match those of his wife. They share common a mission and values.

Husbands want their wives to fight with them, not against them. Marriage isn’t a battlefield. Well, it is. But husbands and wives aren’t on opposing teams. Too often, Satan’s greatest tactic to destroy marriages is allowing the relationship to implode. This shouldn’t be.

Wives, your husband might lead your family, but this doesn’t mean he drags the family along. Jump in the field with him. Don’t just get behind him. Stand beside him.

Respect is to a marriage what oxygen is to our body. You can’t see it. But when it’s absent, everything dies. Respect is the universal love language of men. When a man feels disrespected, the “fit hits the shan.” Even elementary kids get this. How many recess skirmishes result from one boy disrespecting another? All of them.

Respect can be vague, like a word only people in unicorn land can define. But, as a self-appointed Leprechaun, I have access to unicorn land. Women, here’s what it looks like to respect your husband.

Men want to be trusted. Insecurity is a silent disease for most of us. Few avoid it. Those who do live in a culture where respect is prioritized.

Culture paints men as out-of-control animals who need sex slightly more than food. This is unfortunate because it underestimates the holistic benefits of sex. For most men, sex is more than an animalistic longing aimed at fulfilling a physical desire.

Sex bonds emotionally. It connects men to their wife. It reduces physical stress and frustration. It joins a man’s mind and heart to his wife. Specifically for men, sex builds confidence, assuring them that their wife still wants him.

Wives, your husband probably won’t tell you he needs sex (or maybe he will). But you can watch his non-verbal communication. When frustration increases, tension grows stronger, or he feels less confident, sex could be the problem. It’s time to restore the gift of sex. It’s a gift from God with multiple benefits for both sides.

Tiffani and I battled this for years. She couldn’t understand why I enjoyed playing golf. Over time, I became hesitant to ask. Instead, I advised my boys to shoot me a text message asking to play golf or watch a movie.

Anyway, guys need friends outside of their spouse. To be honest, a relationship where two people spend every waking moment with one another is unhealthy. Even if you enjoy one another’s company, that’s great. But there’s a big world out there filled with many different personalities. Make some friends. Put yourself out there.

Husbands and wives should create space for hobbies and buffer zones. Women, I know you don’t understand this (quite frankly I don’t either), but men enjoy buffer zones, especially after work. When he walks in the door, allow him a few minutes to wind down and process the day.

For my fifth birthday, I asked for a Superman cape. Unfortunately, at that time, I was unaware of the relationship between humans and gravity. After receiving my cape, I quickly jolted outside. Tossing the cape around my back, I grabbed my Red Ryder wagon, took a few steps, and jumped.

Apparently, the whole Superman flying thing only works on TV.

But the whole superhero thing is a reality, especially for men. Culture places impossible expectations on us. We must succeed at everything. If our business is struggling, we’re must be the savior. If our family needs help, we must provide. There’s no room for mistakes or weakness. The world’s problems are on our shoulders.

Now, get to work. Superman.

Wives, your husband probably won’t tell you this, but he’s tired of being expected to solve every problem. He has weaknesses. He often struggles with insecurity. Many times, he feels inadequate.

Let your relationship be a safe place for your husband to be open and honest. Give him space to share his flaws. Let him know you don’t need a superhero. And you certainly don’t need a savior.

Mark Twain once said, “I can live for two months on a good compliment.” There’s something powerful about verbal affirmation. Wives, you may or may not be physically stronger than your husband. But you have the power to destroy him. Never doubt that. Many men lose their spirit (and will) as the result of a woman’s verbal assault.

Behind every strong, confident man is a woman who builds him up with her words.

As a blogger and pastor, I receive my share of both criticism and praise. But one word of encouragement from Tiffani impacts me more than a thousand from people I don’t know. The same is true for hurtful words.

Wives, your husband isn’t perfect. You could point out a hundred things he does wrong. But he also does something well. Tell him. Don’t assume he knows. Build up your “BAE.” Here are a few statements wives can say to build up their husband.

When Tiffani says “I believe in you” or “I trust you,” I hear “She doesn’t think marrying me was a mistake.” Verbal affirmation tells your husband you’re with him and for him. Women, if you make this a daily habit, your marriage will improve. Start today.

It’s time to drop the cultural caricature. Men need more than sex and food. God created us uniquely complex. Men, embrace your complexity. Don’t sell yourself short by embracing the world’s picture. Women, don’t transpose the culture’s false narrative onto your husband. He’s a man, created in the image of God. See him this way.

10 Things Your Wife Won’t Tell You She Needs

7 Mistakes Everyone Should Make In Their 20s

Raising Godly Kids Is Not About Going To...

The 7 Most Important Lessons I’ve Learned About...

7 Lies Culture Tells Us About Love and...

Grieving The Loss Of Lovely: The Daughter I...

The Solution To Disappointment, Cynicism, And Disney World