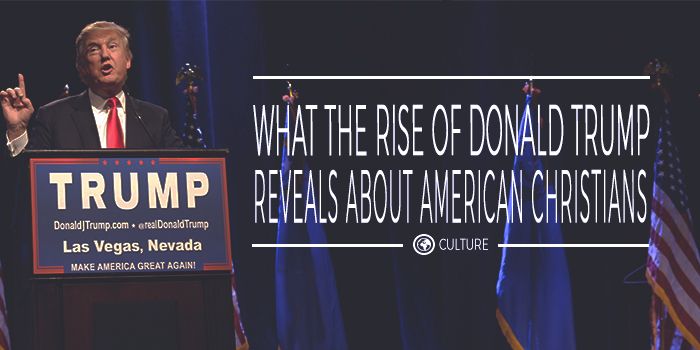 What The Rise Of Donald Trump Reveals About American Christians

After months of rumors and OMGs, I turned on the TV Tuesday night to witness Donald Trump for myself. Before I get too deep, I’m laying my cards on the table. I’m not a political guy. I don’t buy the agenda-driven promises from any politician. I get insanely annoyed by the talking heads (which appears to be almost every news analyst), and I don’t know the political jargon. I would rather hit golf balls, spend time with my family or dress up as a clown than get lost in political debate and discussions about who’s left, right, where, and why.

After Mr. Trump’s “victory” speech (and the awkward, “I just saw an alien” posture from Chris Christie), I took to social media. I wasn’t prepared for the tidal wave of fear and “oh crap, this guy might actually lead our nation” responses. I’m not sure why the world unraveled. Maybe everyone thought Mr. Trump was secretly shooting a spin-off of his reality show, The Apprentice. And at some point, he would pull a “gotcha,” revealing the whole plan, and millions of Americans would breathe a deep sigh of relief.

Apparently, however, there is no reality show.

The Super Tuesday voting painted an abundantly clear message: Donald Trump is more than serious, he has a good chance of winning the whole kit and caboodle (What does “the whole kit and caboodle” even mean?). And, look, I get it. The inconsistencies, the fear mongering and talking down to are obvious and concerning. I don’t know Donald Trump the man. But his demeanor, tone, and vernacular remind me of old-school, fundamentalist, “do it my way or else” church leaders who drove me out of Christianity for a number of years. Again, I’m not saying this is who Donald Trump is, I’m just noting my observations.

Mr. Trump, however, is not the reason for this post. It’s what I saw afterward that disturbed me. I witnessed two groups on opposite ends, both reaching for false hope.

Group one: Trump supporters. Those who believe this man will “make America great again.” Those who believe building a big wall ensures their safety. Those running to a man’s words for hope, safety, and security.

Group two: the haters. Those who see Trump as the end of democracy. Those who believe a Trump nomination inevitably leads to the 2020 Hunger Games (it would take the better part of his term to make this happen…may the odds be ever in your favor). Those who equate Trump to America’s Mussolini or Hitler. And, although, this group stands in stark opposition to group one, it’s reaching for the same thing, hope in a person (any person but Donald Trump).

Quite frankly, I’m not sure whether or not Mr. Trump would make a good President. Does it disturb me that he seems to draw from wells of manipulation and uncertainty? Of course. But I also understand this. Donald Trump reveals that many Christians have taken their eyes off the cross. Many professing believers have placed their hope on something or someone who will ultimately fail them, whether it’s America, the military, or a Presidential candidate. Mr. Trump didn’t create the madness I witnessed last night.

You see, whether Donald Trump, Ted Cruz, Hillary Clinton, Bernie Sanders, or Mickey Mouse win the general election in November, there’s a figure hovering over them, one who’s unmovable, unchangeable, and all-powerful. He won’t be overcome or overthrown.

His name is Jesus.

Assuming the worst, that America crumbles or succumbs to outside forces, two things won’t change: King Jesus will control whatever power controls you and that power will never destroy the church. Even if some group’s anti-Christian practices extinguish the American church, Jesus’s church will never die. This is the promise He made to Peter in Matthew 16:18.

Now I say to you that you are Peter (which means ‘rock’), and upon this rock I will build my church, and all the powers of hell will not conquer it.

The War Is Over

Are we in a war? Yes. Are the forces of darkness strong and persistent? Absolutely.

But let’s not forget the nature of our fight. It’s not against flesh and blood. Verbal assaults might appease your flesh, but they’re counter-productive to the divine fight. Dragging Donald Trump, Hillary Clinton, or your prideful, arrogant co-worker through the mud means you aren’t pointing others to Jesus. Our war isn’t against the world. It’s “against the rulers, against the authorities, against the cosmic powers over this present darkness, against the spiritual forces of evil in the heavenly places” (Eph. 6:12).

[tweet_box design=”default”]Christians act like they’re fighting on the losing team. Have we forgotten? Jesus won the war.[/tweet_box]

Also, don’t lose sight of this: the war has been won. Jesus declared victory on the cross and sealed Satan’s fate three days later when he walked out of the tomb…alive.

Yes, the battle wages on, but the war is over.

Stop fighting as if you’re trying to win the war. Stop running fearfully as if you’re fighting on the losing team. If you’re a Christian, you’re a victor. The mission now is to draw others from the darkness into the light.

If you follow Jesus, I’m challenging to take your eyes off CNN and Fox News. It’s fear-mongering propaganda. Without fearful people, news outlets, local, regional, or whatever, become obsolete. Turn it off. Spend time in the Word. Rather than watching the latest talking head bombastically break down everyone who doesn’t pad their pocket, spend time in prayer. I’m convinced our country’s enslavement to fear is largely the result of too much exposure to TV.

Close your Facebook, Twitter, and SnapChat apps. At almost all times, but especially in times of unknown and uncertainty, social media skews reality. It gives everyone a platform, and it’s usually the fearful, immature, and perspective-less who talk loudest. During times of crisis, the loudest voices aren’t the leaders. Leaders aren’t reactive. They might respond to current events and cultural crises, but they won’t be coerced by fear, manipulation, or outside pressure.

The challenge before us isn’t the direction of our country. It’s the position of our eyes. If we stay focused on the cross, no force has power over us, whether it’s Donald Trump, Hillary Clinton, Puff the Magic Dragon, or a demon from the pits of hell.

Fix your eyes on the living Hope, the risen Savior, not the mirage of words and politically-charged promises. You’re citizenship isn’t here. It never was. Stop running with the masses. They’re enslaved to fear. Stop allowing a man’s words or a country’s principles to distract you from an empty tomb. Jesus is alive. Fear is dead. This world is temporary. Heaven is eternal. Regardless of who becomes America’s 45th President, as Christians, we rest in this truth: Love always wins.

Make Disciples, Not Converts: What Christians Get Wrong About Discipleship

Alive or Awake: How To See The World Rather Than Sleepwalk Through It

So, Mr Powell…I realize that this is your page, your thoughts, your words…blah, blah, blah…But it would probably be best if you do not vote. We have 2 very serious elections coming up, Nov 2022 and Presidential election in 2024. If you don’t understand that these elections concern our freedoms, our money and the freedom to worship…everything important to our Nation. You do know our southern border has been invaded with over a million immigrants flowing into our country?? You do understand that crime has taken over our cities and streets, you little Alabama man…For you to sit there and tell people NOT TO PAY ATTENTION TO WHAT is going on in our world is just blind ignorance…I am not saying to turn away from Jesus Christ, but if Satan is heading up my driveway, I plan on being prepared!! You go ahead and turn off your computer and television and anything else that you want to get away from..Go ahead and stick your precious head in a bucket and ignore the battles facing us….but don’t you DARE TELL THE REST of us where to stand, YOU little coward.,.I’m in my war room, fighting for my freedom to protect my home and my church and for our right to live freely. Grandmother..central Florida