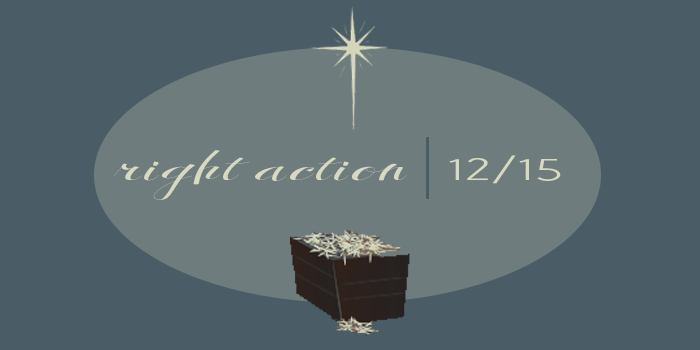 What good is it, dear brothers and sisters, if you say you have faith but don’t show it by your actions? Can that kind of faith save anyone? Suppose you see a brother or sister who has no food or clothing, and you say, “Good-bye and have a good day; stay warm and eat well”—but then you don’t give that person any food or clothing. What good does that do. So you see, faith by itself isn’t enough. Unless it produces good deeds, it is dead and useless. Now someone may argue, “Some people have faith; others have good deeds.” But I say, “How can you show me your faith if you don’t have good deeds? I will show you my faith by my good deeds.” You say you have faith, for you believe that there is one God. Good for you! Even the demons believe this, and they tremble in terror. How foolish! Can’t you see that faith without good deeds is useless? Don’t you remember that our ancestor Abraham was shown to be right with God by his actions when he offered his son Isaac on the altar? You see, his faith and his actions worked together. His actions made his faith complete. And so it happened just as the Scriptures say: “Abraham believed God, and God counted him as righteous because of his faith.” He was even called the friend of God. So you see, we are shown to be right with God by what we do, not by faith alone. Rahab the prostitute is another example. She was shown to be right with God by her actions when she hid those messengers and sent them safely away by a different road. Just as the body is dead without breath, so also faith is dead without good works.

At seventeen, Hitler dropped out of school and moved to Vienna, hoping to attend the Academy of Fine Arts. He was rejected twice. Depressed and angry, he loafed aimlessly for years where he became intoxicated with a fantasy of himself as Germany’s savior. The rest is, unfortunately, history.

Might the course of history looked remarkably different had Hitler pursued his dream fully? Maybe.

But he didn’t. Hitler chose to abandon his purpose. He opted for the path of least resistance. The keyword being resistance because therein lies the enemy.

Resistance is the barrier to any and all spiritual growth.

Resistance is the force that awakens when you seek the Truth, when you set out to do good, when you aspire to be an artist.  Sometimes resistance shows up as failure. Other times it looks like apathy or fear or self-medication or victimhood or isolation or self-doubt. Though resistance shows itself in many forms, it has only one goal: derail spiritual growth.

Resistance always shows up, inevitably. Might take a day or a year, but it’s coming. Doesn’t matter if you’re the Prince of Wales or a homeless man entering rehab. There is a way, however, to avoid resistance in all its forms. Avoid becoming like Christ. Avoid integrity. Avoid love. Avoid forgiveness. Avoid joy, compassion (for self and others), peace and faith.

Resistance doesn’t care if you go to church. Resistance cares if you become the church.

Resistance could care less if you give away your possessions or live in a mansion. Resistance does, however, care if you seek first the kingdom of God.

Resistance doesn’t care if you’re married fifty years. Resistance cares if you love your spouse like Christ loved the church.

Resistance hates Advent. The Prince of Peace is no good, very bad news for this evil force.

I mean, notice all the discomfort, chaos and suffering surrounding Christ’s birth. He comes into the world without the presence of his family and friends (Joseph and Mary, remember, were forced to leave their home and travel to Bethlehem because the king ordered a census). He’s born into circumstances grossly unfit for the son of God, namely an animal trough. On the heels of his arrival, King Herod tries to end his life by ordering the murder of every baby in Bethlehem under two. Resistance is

Resistance hates Advent for another reason. The Cosmic Miracle in Bethlehem exposes the way to defeat Resistance.

Right action is the ONLY way to overcome resistance. Dallas Willard once said, “Nothing will drive you into the kingdom of God like doing the next right thing.”

What is right action?

Right action is the firstborn of silence and waiting. You will never know the next right (godly) thing to do without first engaging in prayer. Right action is always tied to the present moment and it’s always tangible. In other words, spiritual growth is always tied to right now, not sometime in the future and not something abstract. Right action is not necessarily about doing something physically. It’s much more about a heightened awareness and an open heart. Finally, right action will almost always look small and unimportant. It would be easy to overlook and dismiss, like a baby in a manger.

Right action might look like rejecting a negative thought or telling your spouse that you’re sorry or showing up to the present moment or turning off the tv or not giving up in the face of rejection or following through on something because you value your integrity.

Right action is usually that thing that makes you uncomfortable and vulnerable and requires much faith and courage.

And I’m convinced it’s the only path to spiritual growth. The ones whose lives bear the fruits of the Spirit get this. Most of us, even most Christians, are too distracted or anxious or busy to take the next right action.

That’s why Advent matters. It’s about alterness, smallness, slowing down and coming near. It’s an incubator for right action.

What right action is God asking you to take right now?

God, I pray for courage and discernment to resist and overcome Resistance. Thank you, Jesus, for being the way, for giving us hope. Spirit, reveal what you need me to do right now. And give me the strength to act on it. Amen.