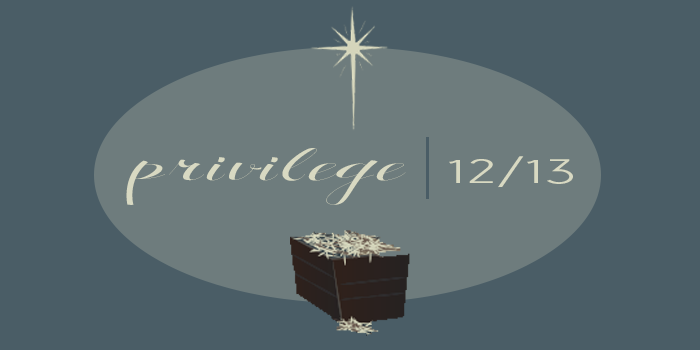 All right then, the Lord himself will give you the sign. Look! The virgin will conceive a child! She will give birth to a son and will call him Immanuel (which means ‘God is with us’).

“No one can celebrate

without being truly poor.

Only the poor, the hungry,

those who need someone

to come on their behalf,

That someone is God.

Without poverty of spirit

there can be no abundance of God.”

The Christmas story is full of scandal – a virgin birth, a lowly manger, a jealous king’s mass murder – but the most scandalous chapter of the Advent narrative is one that doesn’t exist. In this chapter, angels appear to the religious leaders, proclaiming Emmanuel’s arrival.

How could Advent not include the pastors, elders and theologians of Jesus’ day? Were they not more deserving of an invitation to the manger than shepherds and magi? Were they not most deserving of all? These folks had given their lives in service to their local church. They interceded for people on God’s behalf. They studied the Scriptures with diligence.

This group knew all about the Old Testament prophecies. They knew a Messiah was coming. The Incarnation would have been cause for great joy, right? What exactly is God doing by excluding the religious leaders?

To fill the gaps, we need to understand something about those who did see the infant Jesus.

First, of course, you have Joseph and Mary. By all accounts, normal, middle-class folk. Nothing special, except a willingness to trust God, even under the most ridiculous of circumstances (a virgin birth).

You have a collection of shepherds. How many? Who knows. We do know that shepherds, by nature of their work, were unclean by religious standards. Their job title also rendered them societal outcasts.

Then you have the Magi, maybe the most perplexing recipients of Christ’s birth announcement. Who exactly were these dudes? Matthew’s gospel says they came “from the east,” all but assuring they weren’t Jewish. Nearly everything “east” was pagan territory. The word translated “magi” has roots in sorcery and divination. We’re treading in some strange waters now.

What does this bunch show us about the birth of Jesus?

“For the great and powerful of this world, there are only two places in which their courage fails them, of which they are afraid deep down in their souls, from which they shy away. These are the manger and the cross of Jesus Christ. No powerful person dares to approach the manger. For this is where thrones shake, the mighty fall, the prominent perish, because God is with the lowly.”

Today’s Scripture, Isaiah 7:14, is among the most recognizable Christmas texts. “All right then, the Lord himself will give you a sign. Look! The virgin will conceive a child! She will give birth to a son and will call him Immanuel.”

Less recognizable, however, is the context. The recipient of these words was King Ahaz. For some time, Isaiah had appealed to Ahaz to trust God’s promises and make allegiances with military powers like Syria. The king, however, was flooded with fear.

Okay, King Ahaz, Isaiah says. You want a sign from God? You want proof of God’s presence? Here you go.

King Ahaz wants God to protect the nation of Israel. But more than that, he’s afraid to lose his status as king.

What the poo kind of sign is a baby?

Is this not just like God though? He often gives us what we don’t think we need and reveals his presence in ways we wouldn’t expect. Defying conventional wisdom is God’s favorite pastime. He bypasses the pastors in favor of unclean shepherds. He bypasses the faithful Christians in favor of the pagan Magi.

Advent says you must put all power and privilege aside to experience Christ. This is a terribly difficult sell for a wealthy, privileged culture. Most of us won’t buy it. We prefer the security of a good job and the comfort of a homogenous social circle. We prefer to keep the outsiders outside. We’re fine with giving money to the poor, maybe devoting an outreach project to the marginalized in our communities. But we would prefer not to come down from our pedestals and do life with them. They’re dirty and scary and dangerous, after all, those shepherds and magi. I prefer not to expose my church to them. It’s good stewardship, really.

The elite, powerful and privileged will always justify their elevated platforms. I know because I’m privileged and I justify my separation from the marginalized and outcast. I have a ready-made list of justifications for why I can’t plead the cause of the orphaned and oppressed.

Advent sends a very clear message to the powerful and privileged. There is only one way to celebrate Christmas.

Lay down everything – reputation, titles and successes, political allegiances and vain attempts at individualism. Tear down every dividing wall – political, religious or otherwise, every social construct and hierarchy. Repent of any attempt to pigeonhole God, to assume you have the Creator figured out or that your theological knowledge gives you special access to the Divine. You must leave this all behind.

Only then will Advent be cause for great joy.

Take a few minutes to reflect on the people present during and shortly after the birth of Jesus. Ask yourself: if Jesus were born today, would I be among those who received an invitation? Why or why not? (Be honest…but don’t allow shame or self-loathing. Advent calls us to change. Change occurs inside the walls of love and grace, not shame.)

God, I want to be among those who celebrate Advent, who see the arrival of Christ as cause for great joy. Whatever needs to go, help me to release it. Help me to love as you love, to see as you see. Amen!