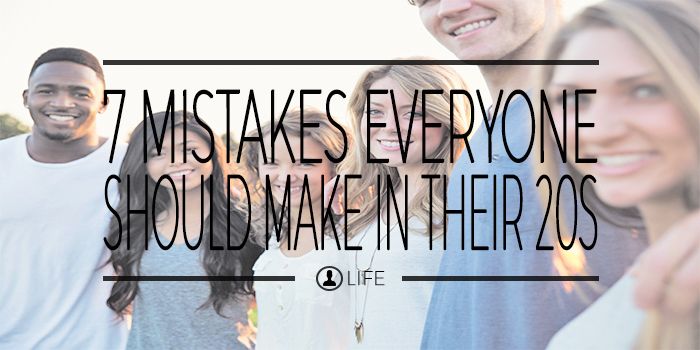 Mistakes are inevitable. And while they may bring pain or embarrassment, mistakes also provide opportunities for growth. In fact, I would say they’re essential for growth. Mistakes teach you about yourself. They help you develop resilience and bridge the gap between idealism and reality.

While mistakes and failures carry negative stigmas, those stigmas mostly carry on through people with meaningless lives. Those living with purpose see value in mistakes. They understand mistakes can be great teachers.

In your 20s, you’re laying the framework for the next 30 or 40 years. It’s important to make a few mistakes now. Doing so prepares you for the years to come.

Here are 7 mistakes everyone should make in their 20s.

To avoid criticism, say nothing, do nothing, be nothing.Aristotle

I will never forget the day someone attacked my motives and character. Talk about a round house kick to the “baby makers.” I was prepping for a Biblical Hebrew class. Mentally exhausted, I closed my book and decided to check a few e-mails. That’s when I saw it. A scathing e-mail from someone I loved and respected. He attacked everything from my competency as a minister to the future of my family.

To avoid criticism, say nothing, do nothing, be nothing. -Aristotle

The fallout lasted several months, ending with me leaving for a new ministry job.

When someone attacks your character, it means you’ve challenged the status quo or you’re doing something that matters. Though this man’s words wounded my heart, I grew from them. I stepped out of the storm a stronger man, more resilient and prepared for the reality of my position. If you want to accomplish anything valuable, you will face severe criticism.

If you’re experiencing criticism now, it’s because you’re a step ahead of your peers. While many in their 20s binge-watch Netflix, you’re doing meaningful stuff.

When attacks come, they will hurt. They will wound. But you will grow. D

Rock bottom is incredibly painful, but it’s in this hard, painful space that you are liberated. There’s nothing to hide. Nothing to protect. At this point, your ego and pride are gone. Your only options are to die on the rocks or look up and start climbing.

J. K. Rowling, in a commencement speech at the University of Harvard in 2008, described her rock bottom experience.

I’ve often met people who are terrified—you know, in a straitjacket of their own making—because they’d rather do anything than fail. They don’t want to try for fear of failing,” she says. “[Hitting] rock bottom wasn’t fun at all—I’m not romanticizing rock bottom—but it was liberating. What did I have to lose?

Rather than give up, I decided to climb….right to a counselor. This decision saved my marriage and my life. The first day, I walked into his office depressed, dejected, and unsure about my future. Four months later, I finished counseling convinced I could beat a decade-long addiction, excited about the future of my marriage and my life.

Many of you will hit rock bottom in your 20s. Maybe rock bottom means dealing with the loss of a spouse, parent, or close friend. Maybe it means being fired from a job you love. It could mean an addiction leaves you without friends, family, or even a home. Whatever rock bottom looks like, it will hurt. But it’s here that you have an opportunity. With nothing else to lose, there’s no need to look around and it’s pointless to look down.

In this moment, you have an opportunity to look up, give everything to God, and allow Him to turn your rock bottom experience into a life-changing testimony.

3.) Doubt yourself and your faith.

You see, I experienced these difficult seasons because I ventured into unknown waters. I challenged the status quo. I made a decision that required God showing up. I realized a particular ideology (or theology) was not only flawed but incorrect. And, consequently, everything I knew about God and faith came crashing down. Call it the wilderness. Call it a season of darkness. Call it whatever.

While that type of life might be easy, your legacy will be minimal and you will take your last breath with regret and “what ifs.”

4.) Be careless with your time and money.

If you’ve never been accused of being naive or irresponsible with your finances or time, you’re probably not open-handed enough. We live in an incredibly close-handed culture, and I’m just talking to Christians right now. The church is as close-handed as any group on earth.

Christians have determined it’s more important to be judges than servants.

Somehow, Christians have determined it’s more important to be judges than servants. Before we give money or food to people, they must pass a standardized test equivalent of questions, as though God cares more about whether we’re enabling someone than being Jesus to them.

Be vulnerable. Trust God. Our country, in general, and the church, in particular, is desperate for a new generation of Christians who will stop playing judge and start being Jesus. Model this for us. Make open-handedness your way of life.

Inevitably, you will face this tension. As you transition from one season to the next, staying connected with old friends will become increasingly burdensome.

While this is a painful lesson, it’s best to learn it now. As you transition to new seasons, you will lose contact with former friends in past seasons.

If you’re letting go of old friendships, but building new ones, you’re on the right track. This means you’re putting yourself out there, not afraid to be vulnerable. You’re intentional about building relationships.

More times than not, the ones who keep the same friends from elementary school through retirement are those who are content with mediocrity. They hate change, their job, the President, and deep down, their mediocre life.

So, don’t get upset if you lose contact with friends from past seasons. It might appear as though you’re losing something. You’re not. The friends you made in previous seasons played a role in getting you to this point. That’s huge. Now it’s time to put yourself out there and build new connections and relationships.

Grasping this difficult truth now will prevent you from years of regret or too much meaningless energy maintaining dead relationships.

I used to believe contradicting myself would be the worst thing in the world. Now I believe not speaking from your heart, especially when you’re convicted about an issue, is much worse. Here’s the deal. Unless you’re Jesus or sit in silence, you will contradict yourself.

This is the reality of growing and learning. It’s also the beauty of God’s grace. He doesn’t need perfect people. He just needs willing servants.

Don’t remain silent because you’re afraid some cynic will record your words and use them against you. In life, only two types of people exist…players and fans. You’re either on the field, fighting to push back the darkness and make this world a better place. Or you’re a fan, not doing anything meaningful with your life.

You want to be on the field. So, start playing. Put yourself out there. Take a stand.

I choose the former.

You should get used to this now. I get it. You’re a people pleaser. I am too. But, if you want to accomplish anything, if you want to have a life, you must learn this truth.

Everyone, especially those you love, will throw expectations on you. They will take from you as much as you give. At some point, however, you must realize you can’t please everyone. You can’t make it home for all the holidays. You can’t spend four hours on the phone with a needy friend. You can’t volunteer for everything at your church.

You must learn to say no and disappoint people or become a puppet to others expectations. You can either please everyone and hate your life or hurt some people’s feelings and live your life.

You must either learn to say no or be a puppet to others’ expectations.

But you can’t do both.

These mistakes might seem like setbacks, but they’re really opportunities. And those who commit them will be more prepared to live joyfully, love recklessly, and act generously, leave an impact on the world.

So, start making a few mistakes.

What are some mistakes you made in your 20s that helped you in your 30s, 40s, and so on? If you’re in your 20s, what mistakes have you made? What have you learned from them? Leave a comment below.