In less than a week, the most highly anticipated, highly discussed movie I can remember in years hits the big screen, Fifty Shades of Grey. And, I need to make a confession. Before last week, I didn’t read a single article or engage in a single conversation about either the book or the movie. Frankly, I didn’t care.

But slowly the articles began littering my Facebook timeline and Twitter feed. And, like a kid hovering around a candy store too long, eventually I took the bait. As sad as this sounds, right now if I were asked over/under 50 articles about Fifty Shades in the past week, I would choose over.

And here’s why I read so many. I noticed a trend that I had to explore. A trend that brought me sadness and frustration. You see, most of the articles that crossed my eye were from Christians blasting the film. And the more articles I read, the more nightmarish pictures developed. Pictures of an old preacher in a suit telling everyone they were going to hell if they didn’t repent.

But this is what Christians do. When something takes over culture, we proceed to tell the world why they are wrong and we are right.

Now, understand this. I see no value in the movie or the book. And I am certainly not against freedom of expression. But it’s the same song, different verse for Christians. We beat the world over the head with our verbal attacks, but we fail to provide any substance or foundation. We lash out at the evil world, but our refusal to explain why only leaves us looking like control freaks. Worst of all, we believe attacking a movie means we actually stand against sin.

Maybe the world bought some lies about 50 Shades, but we bought some as well. Please understand my aim here. I want the Spirit to awaken us to inconsistencies. I want us to deal with the substance behind the shadows. With that said, here are four lies Christians believe about 50 Shades of Grey. 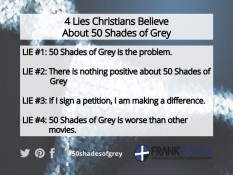 LIE #1: Fifty Shades of Grey is the problem.

Fifty Shades of Grey is not the problem. In fact, whether or not we watch the movie shouldn’t be the primary concern.

No, not at all. Cultural phenomenons like Fifty Shades of Grey give us an opportunity to show the world we are “serious” about God’s design for sex, romance, and the like. Many times, however, we are just serious about hiding under facades.

These phenomenonas allow Christians to feel good about ourselves while leaving the real issue untouched. What is the real issue? Our heart.

If we attack the evil culture for watching Fifty Shades of Grey but we don’t attack our evil heart, we aren’t winning.

[tweet_box design=”default”]Attacking culture for viewing Fifty Shades of Grey but not attacking our heart isn’t a win.[/tweet_box]

This movie isn’t the problem…it is a shadow of the problem. The problem is our heart.

If so, stop hiding under the facade of 50 Shades and start attacking the real issue…the heart.

LIE #2: There is nothing positive about Fifty Shades of Grey.

You know what issues like this force Christians to do? Get our head out of the sand and acknowledge our distorted view of sex and romance is destroying our world and our young people. Christians have an opportunity right now to talk about sex. An opportunity to explain to young people, in particular, and our world, in general, the history and origins of sex through the lens of its creator, God.

For too many years, Christians played defense with sex. Like a kid attacked by a bully, we just handed sex to the world. Without a fight.

“Here, world, you take it. Just, please, please, don’t force me to talk about it. Please don’t make me explain it to my kids.”

Where in the timeline of humanity did we forget sex was designed and implemented by God? Yes, Christians, sex is a gift. One to be celebrated, cherished, and discussed. One divinely created so those who experience it would see the divine Creator.

Well, we have an opportunity to take back our candy. In the next month or so, everyone will be talking about sex. This means we need to take advantage of the moment and sit down with our teenagers/adolescent. We need to have serious conversations about God’s design for sex. Maybe it’s time to talk about the GIFT of sex with our friends or those we disciple.

Maybe nothing positive comes from the content in the movie. But something positive can come from the cultural phenomenon it has created. We have an opportunity to redeem one of the greatest gifts God has given us…sex.

LIE #3: If I sign a petition, I am making a difference.

If you want to sign a petition saying you won’t see the movie, go right ahead. But don’t believe signing a petition and making a difference are two sides of the same coin.

This is an enormous problem in most Christian circles. We would rather picket and sign petitions than actually attack issues. We care more about ideas than transformation.

So, what would make a difference? Stop signing petitions and start adding substance to your reasoning. Our failure to provide substance to our stances makes us look ignorant and hypocritical. It is the reason the next generation is leaving the church and no one in particular wants to join.

God never called Christians to sign petitions. Mostly because they are a waste of time. But he did call us to step into darkness and call out inconsistencies…with love and grace.

LIE #4: Fifty Shades is worse than other movies.

Many won’t like this, but it needs to be said…the lies and manipulations prevalent in 50 Shades are no different than many of the lies in shows Christians watch every week.

You see, there is a problem (and the world notices) when we crucify those who watch Fifty Shades but re-arrange our schedules to watch shows like The Bachelor, Scandal, The Big Bang Theory, and How I Met Your Mother, among others.

Now, I have made it personal. But really. The same sins are celebrated (sex, drugs, money, etc.). The same lies are preached.

Here’s my point: Christians are sadly mistaken if we believe abstaining from Fifty Shades means we honor holiness and purity. There are perversions of God’s truth on sex and life in so many shows we view every week. There are movies many Christians pay way too much money to see that celebrate the same sins Fifty Shades celebrates. It’s time to stop playing the game.

Whether extremely graphic or subtle, what we watch matters. So, before we go blasting those who watch 50 Shades of Grey, we need to consider other shows or movies we watch regularly that celebrate the same sins.

Let’s start attacking the real issues in our heart. Let’s stop placing more value on signing petitions than authentic transformation. Let’s teach others about God’s truth related to sex and romance. If we do this, there could be much to redeem in our culture because of this movie.

50 Shades of Truth About Sex, Love, Romance, And Passion

The Desire To Be Right Is Killing Us....