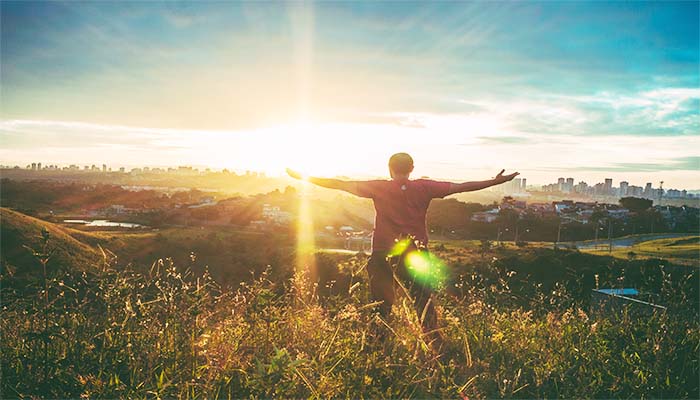 7 Qualities Of An Emotionally Mature Christian

How is it someone can be saved and not look much at all like Jesus?

Controlling and manipulative pastors. Elders who gossip, rant, and lose their cool. Christians more materialistic than their non-Christian neighbor. Christ-following people who believe they must fix and change everyone around them. Parents who helicopter over their kids, drawing meaning and identity from them.

I was that Christian.

My spiritual discipline game was tight. I read the Bible and prayed everyday. But I was filled with anxiety and fear, my mood often unpredictable.

Several months ago, I discovered something that started me on a journey towards a more healthy, Christ-centered life.

I realized I was emotionally immature.

Even though I knew the Bible well, prayed often, and valued Christ-centered community, I was an infant emotionally.

And, as Peter Scazzero writes in his book Emotionally Healthy Spirituality,

“It is impossible to be spiritually mature while remaining emotionally immature.”

Bold statement? Yes. Overkill? Not in my opinion. In recent years, authors like Daniel Goleman and Travis Bradberry have awakened millions to the benefits of emotional maturity, connecting it to everything from healthy relationships to success in the workplace. In fact, Goleman says emotional maturity (or EQ – emotional quotient) is more important than God-given intelligence (IQ), accounting for 90% of what moves people up the ladder.

So, what is emotional maturity?

In short, it’s the ability to identify and manage your emotions, as well as the emotions of others.

Emotional maturity seeks to do these things:

This, I believe, is a missing component of spiritual formation in the American church. A big one. Fortunately, emotional maturity isn’t fixed. We can grow and become more compassionate, self-controlled spouses, parents and leaders.

I’m still a long way from emotional maturity. But for the first time in my life, I have a picture of what it looks like.

Here are 7 qualities of an emotionally mature Christian.

1. You accept others without trying to fix or change them.

Several months ago, the fam returned from Disney World to a loud sound in the laundry room. Turns out the basement was filled with a foot of water. Thanks life.

We called a plumber who said he charged $75 just to walk in the door. I said no thanks rather jerkishly. And I didn’t feel bad. Then I proceeded to fix the problem myself.

Two days later, after hours of digging, cutting and other plumbing crap (literally), I fixed the problem. The rush I felt afterward was similar to the time I bought my first new car. I sent pics to everyone, letting them know I, Frank Powell, fixed this problem.

Fixing stuff is intoxicating. So is fixing people.

But it’s not healthy.

They understand God doesn’t need divine plumbers. And they don’t want to see their brother’s crack. So they wear their pants at an acceptable height, resolve to leave the fixing to God, and spend more time listening than talking.

2. You step into conflicts and resolve them in a healthy way.

“Fight or flight” – the way most respond to conflict – doesn’t solve conflict, resulting instead in emotional outbursts or a “head in the sand, conflict doesn’t exist because I don’t see it” perspective (which usually only creates more conflict).

Many Christians, myself included, equate peace and unity with conflict avoidance, which bucks against the ministry of Jesus. “Sweeping stuff under the rug” doesn’t make conflict go away, and it’s certainly not Christian.

Emotional maturity says you can deal with conflict in a way that brings both resolution and growth for both sides.

But doing so requires empathy (an awareness of the other person’s feelings and situation), being in control of your emotions, and a focus on resolving rather than winning.

3. You give without expecting anything in return.

Emotionally mature Christians rise above the tit-for-tat, give-and-take, “you scratch my back, I’ll scratch yours” culture where so many are content to live.

They give of themselves without logging their work for future leverage. They remove household duties from their spouse without expecting her to approve the boys’ golf weekend.

When you give expecting in return – whether you state it explicitly or you mentally log it until “an opportune time” – you’re enslaved to the receiver and the receiver’s response. Emotionally mature Christians aren’t enslaved to anyone.

4. You believe God loves you for who you are, not what you do.

Emotionally immature Christians teeter on the edge of burnout and believe God honors such a thing. They say yes to everyone and would probably look down on a Christian who thinks otherwise. In general, their view of God and God’s view of them depends on how much they do.

Emotionally mature Christians embrace a slower version of Christian living, believing God cares more about who they are than what they do. They know their limitations, and they’ve moved past trying to save the world.

They’re patient and hopeful, motivated by love to serve others. But they don’t allow their works for God to outweigh their time with God.

5. You’re not a perfectionist.

Perfectionism clothes itself in a more desirable virtue, excellence.

Emotionally mature Christians know perfection is impossible and quite toxic to pursue.

Here are a few signs you’re a perfectionist:

Emotionally mature Christians never lose sight of their fallible, limited nature. They celebrate small victories, and they’re okay with mistakes. They work hard, but they also play and rest hard.

6. You don’t play the victim card.

As long as I can remember, I’ve used the victim card to buy attention and power. My situation was always “their” fault. By “their” I mean anybody or anything but the man in the mirror. The victim card gives you an answer to why your life sucks, why you didn’t get that job, why your marriage is falling apart, etc.

But the victim card never tells you the only thing that will transform your life: you’re the problem, and your life will change when you take control of your actions.

Emotionally mature Christians undoubtedly hear the lies of victimhood, but they don’t listen. They believe life is a choice. They take control of their actions. Real power is found here because people and circumstances don’t impact their joy and peace.

7. You receive criticism without becoming defensive.

Emotionally mature Christians know themselves, their strengths and weaknesses. They also know their gifts, the unique ways God wired them to serve the world. Criticism, therefore, doesn’t wreck them, nor is it a personal attack.

Unless you know who you are, and find your identity in God, criticism will impact you – almost always negatively – because you’re tied to opinions of others.

Emotional maturity is not only important for spiritual growth and maturity, it’s essential. God designed us with emotions. They’re an important component of our humanity, but they shouldn’t impact our decision-making.

When we understand our emotions, we’re in control of ourselves, able to identify (and change) destructive behavioral patterns, and we’re more compassionate.

This, in turn, makes us better leaders, spouses, parents and friends.

If you want some resources on emotional maturity, I recommend these:

Grieving The Loss Of Lovely: The Daughter I Never Met, But Will Always Love

7 Lies Culture Tells Us About Love and Romance

9 Microhabits That Will Transform Your Spiritual Life

6 Important Truths For Anyone In A Season...

Thank you for the article.

Great blog that I enjoyed reading.

I’m shouting hallelujah for the resurrection of your God given power to lift others up. Thank you for using the power of God in you to storytell. I’m working on my emotional intelligence and this has been a confirmation for me.
Love you always. Vicki